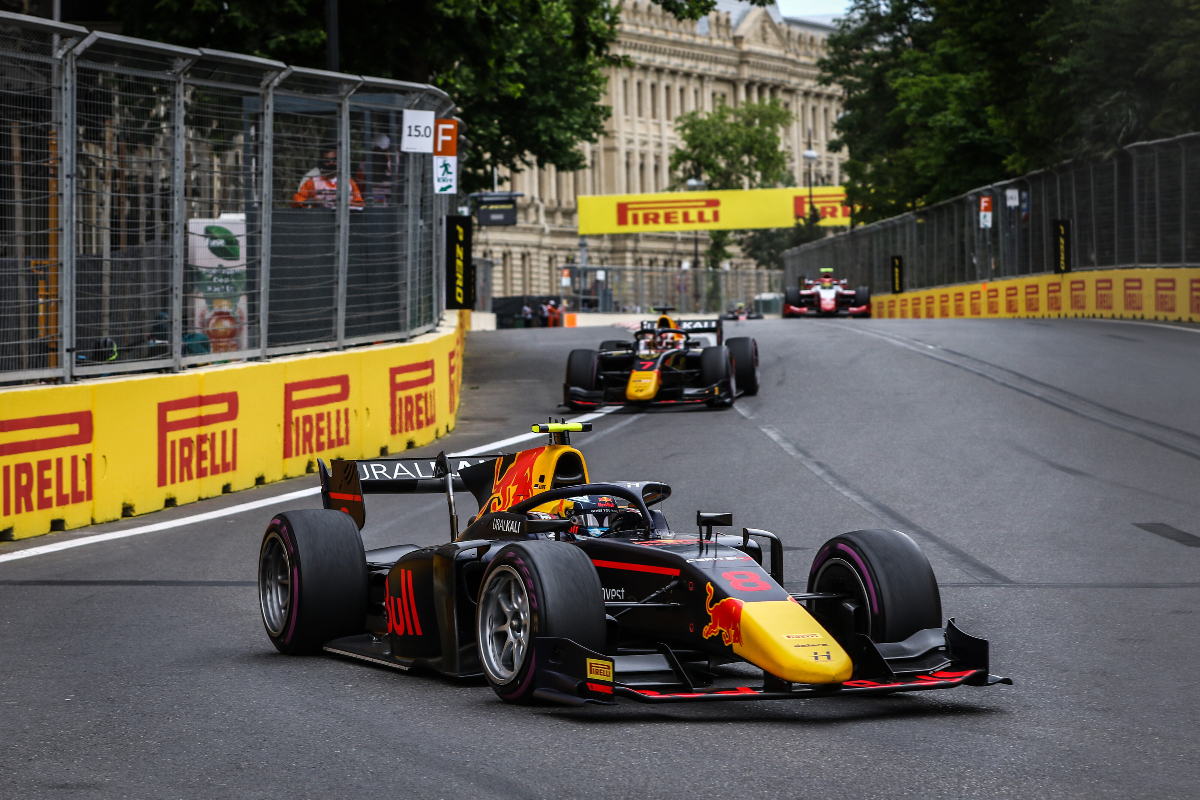 Hitech GP’s Juri Vips took two confident and commanding victories on the streets of Baku. After missing out on pole in qualifying to team-mate Liam Lawson, and a poor first race, how did he emphatically rebound?

Such is the nature of contemporary Formula 2, with its new three-race a weekend format, it feels as if each weekend is starting to belong to a particular driver. Alpine junior Guanyu Zhou executed strategies in Bahrain to brilliant effect that, on paper at least, seemed absurd. In Monaco, it was the turn of teenage sensation Theo Pourchaire to tear the record books up.

There was a sense of some sort of title momentum starting to take shape between Zhou and fellow Alpine junior Oscar Piastri. Heading to Baku the expectation was chaos and for cool and collected heads to be the ones to come out on top.

Coming into this weekend, Hitech GP already had race-winning prowess in 2021. Lawson won the Bahrain season opener and should have won the second Monaco sprint race after a superb pass on Piastri if not for a throttle map violation. An area of weakness, however, was qualifying. It was something Lawson in particular highlighted as an area Hitech needed to sort out.

Formula Scout chatted with Hitech’s Juri Vips on the Thursday media roundtable ahead of Baku. When asked the standard “when will the results come?” question, Vips seemed totally confident it would be quickly.

“I mean, I’m not all that negative about the beginning of the year,” he said.

“We could have scored a lot, lot more points than we have, but there’s a lot a positives to take. The car has always been very good, and I’m sure if we just keep working hard and not do mistakes the results will be [there].

“We have made some small errors that have cost a lot of points, and obviously I’ve lost a victory as well due to technical issues in Bahrain. There’s been a few mistakes but I’m sure we will get rid of them and get going well.” 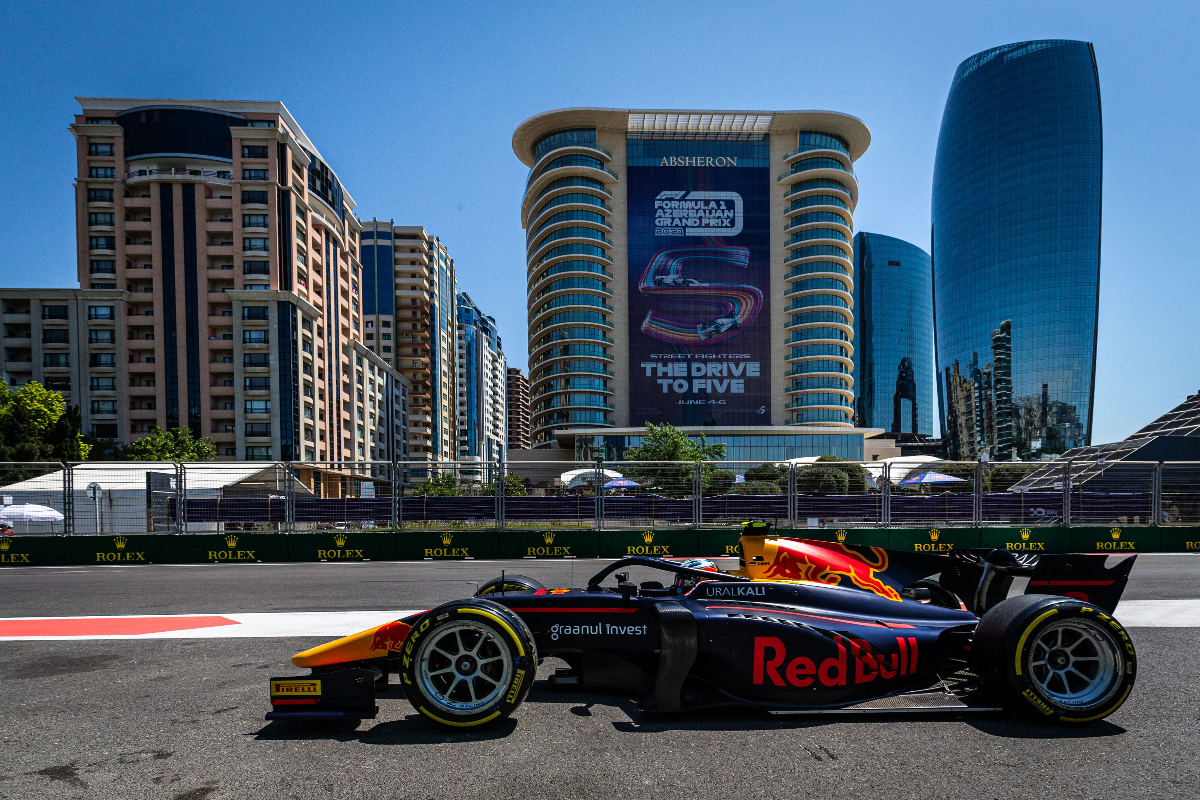 Vips duly kept to his word when F2 hit the track early on Friday morning. Not only was the Estonian quickest, but he also smashed the field by three-quarters of a second. That was not merely ‘bolt on supersoft tyres for a glory run in the final moments’ pace. That was legitimate, eye-opening speed from both him and Hitech.

Such was the pace, fellow Red Bull junior Liam Lawson made sure he studied what Vips was doing. It paid off for Lawson as he snatched pole from Vips, who made an error into the Turn 5/6 chicane on his quickest lap.

“I was just saying how we needed to sort out our qualifying because we couldn’t keep doing this all year,” said Lawson, whose strong sprint race results prior had been built on qualifying down the order.

“So, we’ve managed to sort it for the third round. Let’s try and keep this going.”

Vips joked that he wouldn’t allow it to happen again, but it shows a little of the dynamic between the pair. While Vips is the more experienced driver, and not a rookie officially, he still has very few races under his belt at this level. He feels like a relative newcomer to the championship still, perhaps a pseudo-rookie being the best fit to describe it.

Lawson, meanwhile, a true rookie, has been excellent in his F2 career to date. Bold, aggressive and not afraid to speak his mind, he’s been a welcome addition and makes for a very interesting character to have alongside Vips. Given how impressive his FIA Formula 3 Championship campaign last year was, and how well his 2020 rivals Piastri and Pourchaire are performing, should it be a surprise? Absolutely not.

The first race didn’t go Vips’ way. Starting ninth, he made very little impact and climbed one spot to finish eighth. While that in itself is unremarkable, the fact that Lawson, Piastri and Virtuosi Racing’s Felipe Drugovich were all wiped out at Turn 2 and would have had a strong pace potentially pushing Vips out of the top 10 was an important factor to his weekend. 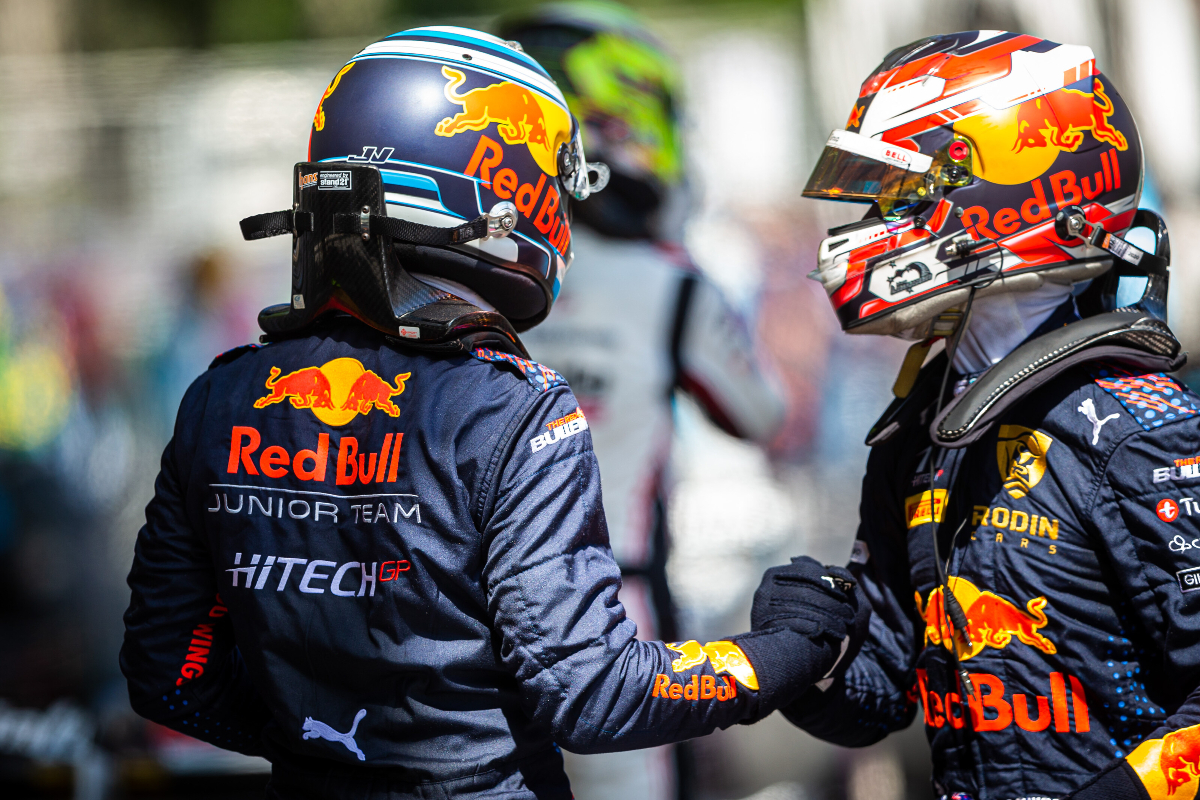 “I definitely didn’t nail it this morning, it was a pretty poor race from my side, but we learned quite a lot and we expected the temperature drop and yeah, pretty much nailed it today [in race two],” he said.

He added on Sunday that “I had a lot to learn after race one, because basically I ruined my race already before it began. I ruined the tyres so I had just no pace, it was a very small thing but it had really, really big consequence and it definitely cost me a few positions there.

“I’m also not a full-on rookie, but I don’t have as much experience as the second-year guys. I’m not happy that I made this mistake, but I’ve learned from it and the last two races have been very strong.”

In the second sprint race, Vips worked his way through past Trident’s Bent Viscaal and Charouz Racing System’s David Beckmann to take the lead. He had to overcome real and virtual safety car restarts to secure a brilliant maiden victory.

Hitech’s team boss Oliver Oakes shared with Formula Scout the reaction to that win, in the 100th race of modern F2.

“Actually Bruno [Michel, F2 CEO] said that to me on the podium, that was pretty cool to have won the 100th F2 race,” Oakes said. “I think Baku was our 15th race weekend in the series… hopefully we can get a few more over the coming years!”

On the dirtier side of the grid for Sunday’s feature race, Vips vaulted past poleman Lawson to take the lead at the start. It all unravelled quickly for Lawson, who was penalised 10 seconds for forcing Pourchaire towards the inside wall after the first corner. From there, Vips was brilliantly able to control the race, while Lawson recovered from his penalty to finish sixth.

“We have talked about ‘executing a clean weekend’ in the build up to Baku and I think that is how I would pretty much sum it up,” Oakes told Formula Scout. 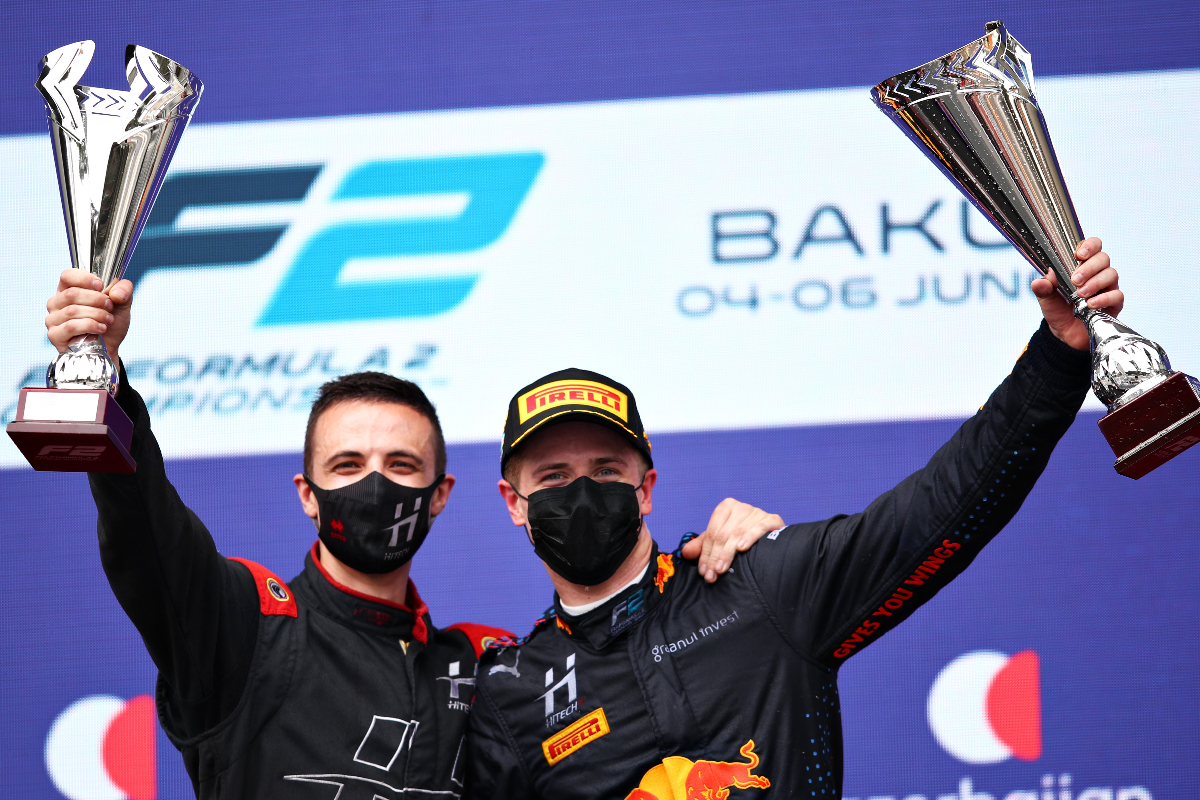 “With Bahrain and Monaco we clearly had pace but felt we under-delivered result wise due to various reasons (crashes, failures, slow stops, disqualified, missing third push lap in qualifying) all part of the ups and downs of an incredibly competitive series!”

It wasn’t just the drivers that were improving on round two and making progress as the Baku weekend went on.

“In Baku the drivers from the first lap in free practice were on it, pushing each other in various parts of the track,” added Oakes.

“The engineering group from the moment we dropped the car on the track, had everything dialled in – which is ever more difficult with the track evolution across the weekend now with three races.

“The mechanics have been training hard since Monaco to overcome an issue we had on the stops there too.

“It’s always the same – when you fly home after a good weekend reflecting, it’s always all the small details all coming together that point to why it was successful. That’s the challenge to try to do that each weekend.”

For Vips, it properly vaults him into the title battle. He’s 15 points off Zhou, who had a miserable feature race and a car issue in the second sprint, and that gap is very small in the grand scheme of things as the table has tightened up with the top eight all being split by 28 points down to Lawson. That’s less than the points earned with a feature win from pole.

Vips described it as “crazy” to think that’s the case already given his torrid Bahrain start, but he’s actually been more consistent in his results than any other driver.

Lawson’s pace, while not on Vips’ level, was also very strong in Baku. Crucial mistakes (and a bit of misfortune) from the likes of Piastri and Carlin’s Dan Ticktum allowed Hitech, and Vips in particular, to totally dominate the weekend. 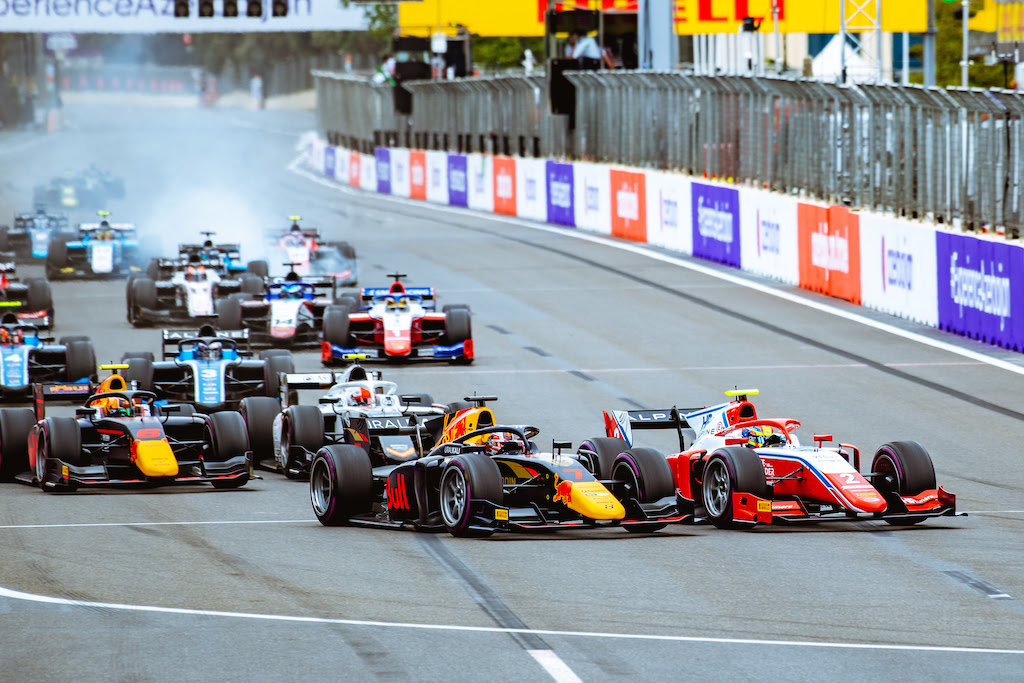 While it does seem ominous form going forward, there is little to say convincingly that Hitech now is the team to beat. It clearly has two very strong drivers in Vips and Lawson, whose FIA F3 seasons with the team perhaps didn’t get the recognition they deserved, and the combination was wildly competitive in Baku.

But the way that this season is playing out likely won’t allow for this to be built on.

“As a group we are never under illusions how difficult it is to win at this level and it is why it’s a huge amount of effort goes into every weekend, from the drivers preparing, the engineers doing their homework, the mechanics building the cars, training for pit stops, getting everything turned over to fly air freight,” Oakes summarised from his perspective.

“I am just very proud of the group when it all comes together… it’s a credit to how everyone is working together across the team pushing to win, with both cars. It’s a long season and we know we are not getting carried away.”

F2 this year is so very competitive. The championship narrative after three rounds is that there simply isn’t one. Five teams realistically look like title contenders with at least one driver, and a few wildcards could well still surprise with late charges. Consistency, rather than a huge speed advantage, remains king in F2 in 2021.

Each round has had different stories and stars, and it is all likely going to have a wholly changed tale when F2 hits its first ‘normal’ circuit of the year at Silverstone. Hitech, like at Mugello last year (before both drivers took each other out), spoiled everybody else’s party at Baku. The next event, however, will likely produce a fourth standout star in as many events.

More 2021 F2 analysis
Opinion: Why F2’s stewards were right to let Deledda race in Monaco
The numbers telling MP Motorsport it needs to keep Verschoor in F2
What Bahrain told us about who’s fastest in F2