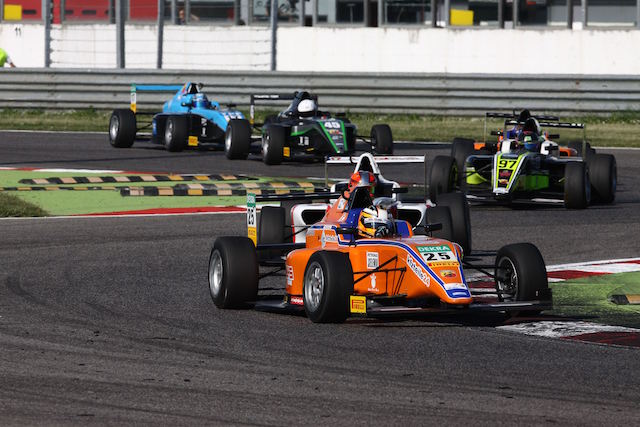 There were three different winners from the three heats at the second round of the Italian Formula 4 season at Adria.

Only 31 drivers have entered the second event – 10 fewer than the Misano opener, with Prema among those absent – but the new format remains with drivers each contesting two of the three heats prior to the final.

Yan Leon Shlom leapt from ninth to fourth at the start and stayed there until the finish, holding off?Marcos Siebert.

Fresh from winning his debut single-seater race at Sochi last week,?Richard Verschoor?is racing for Bhaitech and finished sixth in race one.

Baiz took the lead of race two from pole-sitter?Raul Guzman, but was repassed by the Mexican later on.?Yifei Ye also got past his team-mate on the final lap to take second.

In race three, Guzman again lost out at the start, this time to Cunati. An attempted move to regain the lead on lap 11 led to contact, with Guzman retiring and Cunati falling to second behind Siebert. Verschoor completed the podium.

Based on the points scored over the three heats, Baiz is set to start on pole for the final race ahead of Siebert, Cunati, Vieira and Guzman.