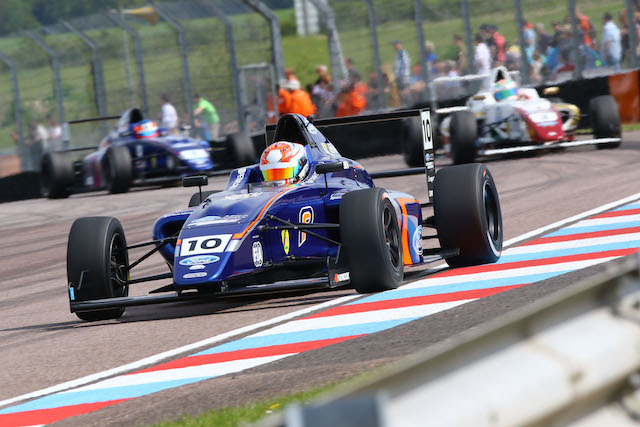 Petru Florescu regained the championship lead in the newly-renamed British Formula 4 after a dominant win in the first race at Thruxton coincided with a spectacular?crash for?Max Fewtrell.

From pole position, Romanian driver Florescu pulled away to an 8.8-second win over Carlin team-mate?Devlin DeFrancesco.

DeFrancesco was passed by relative veteran?Sennan Fielding?for second on the first lap, but he would regain the position?into the chicane later on.

Erstwhile points leader Fewtrell also lost out to Fielding on lap one and was passed for fourth on lap six by team-mate?James Pull. Fewtrell attempted to fight back a few laps later but collided with Pull at the chicane and was launched into the air, landing on top of a tyre barrier but escaping unharmed.

Pull finished sixth behind?Alex Quinn and?Luis Leeds, who came from 10th on the grid after a low-key qualifying result. Ginetta Junior graduates?Jamie Caroline and?Billy Monger both ran ahead of Quinn in the early laps, but a mistake dropped the former to 10th, while the latter retired after debris damaged a?brake line.

Jack Butel took seventh and with it pole for race two, ahead of?Patrick?Matthiesen and?Ross Martin.