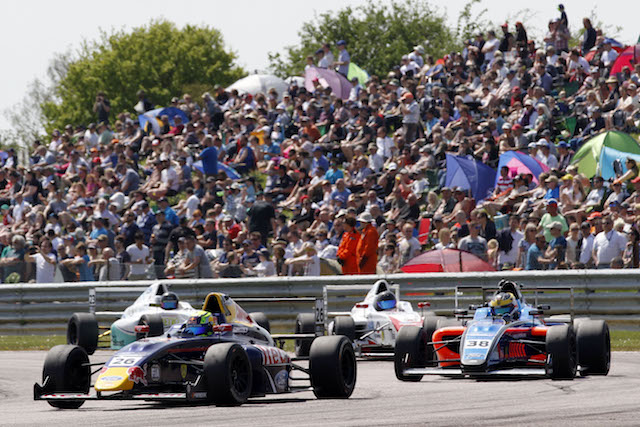 Red Bull Junior Leeds charged from third to first on the opening lap ahead of James Pull and Alex Quinn, with Jamie Caroline shooting from 10th to fourth and reverse-grid pole sitter Jack Butel dumped down to fifth.

Caroline moved up to second on lap two, with his move into the complex forcing Quinn into an error, clattering into Pull as he tried to out-brake the Ginetta Junior champion.

DeFrancesco came up to third with Butel in fourth, but after a safety car period to recover?Nicolai Kjaergaard?s beached car, they came to blows at the Club chicane, with both forced to retire with damage.

That put?Petru Florescu into a brief third prior to a technical problem, with?Billy Monger the first of those behind him to benefit as he completed a remarkable drive from 18th.

Leeds beat Caroline to the win by?2.683 seconds despite a second safety car period, with Caroline holding off late pressure from Monger and?Carrie?Schreiner, competing in just her second UK meeting.

Zane Goddard came from the back of the grid to take fifth ahead of?Sennan Fielding, who survived unscathed from a three-way penultimate lap coming together at Club?with?Max Fewtrell and?Harry Hayek.

Pull recovered to seventh ahead of?Jack Martin, who was later excluded for sending?Frank Bird into a spin when the second safety car was called.

Race two was an even more thrilling affair, with a scrap between the Carlin quartet and JHR drivers Fielding and Monger.

Florescu led the early laps from pole, tracked by Fielding, Fewtrell, DeFrancesco and Pull. DeFrancesco moved to the head of the chasing pack and pressured Florescu into an error on the exit of Club, with the Romanian doing well?to stay?out of the barriers. Falling to fifth, he made an identical error a lap later to lose further ground.

Fielding spent a lap in the lead before DeFrancesco reclaimed the initiative, which he managed to hold onto until the end.

Behind, Fielding, Fewtrell and Monger went three-wide through the high-speed first corner and emerged without contact with Monger ahead to finish second.

Fewtrell ended a tough?weekend on a high with third, with Fielding falling to fifth behind Pull.

Fielding moves into the championship leader however. He was tied with Leeds before the Australian was relegated from seventh to eighth – behind Goddard and Quinn – for gaining an unfair advantage.

Florescu finished ninth, and is just six points behind Fielding?even though he’s fourth in the standings behind Leeds and Fewtrell.