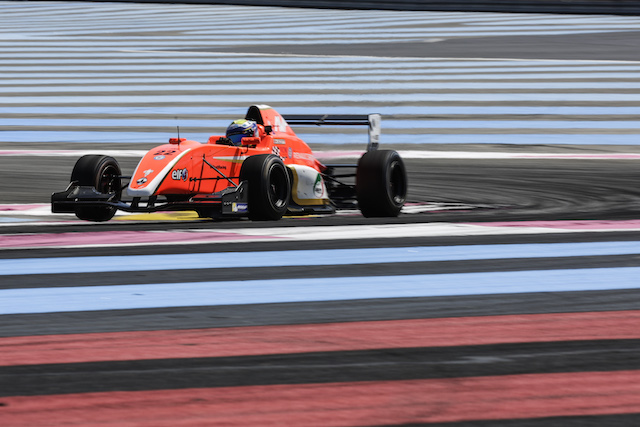 Harrison Scott has taken his third Eurocup Formula Renault win in as many rounds at the first race at Paul Ricard.

Though the Brit lost the lead at the start, he was able to get back ahead and defend against championship leader Lando Norris all the way to the flag to take his third win of the season.

When the lights went out, Will Palmer made a much better start from the front row than Scott to muscle his way past going into the first corner. Behind them, the battle for third was between Norris, Robert Shwartzman, and a fast starting Max Defourny from sixth position.

Palmer held the lead for all of four corners before he was overtaken around the outside of the Mistral Straight by Scott. Norris would then make his way around Palmer as well into turn five.

With five?minutes left on the clock, Norris started to make his move on Scott for first position. Though Norris tried at almost every corner of the track, Scott was able to keep him behind, and this allowed the following pair of Palmer and Defourny to catch up and make it a four way battle for the lead.

Despite all the pressure, Scott was able to keep Norris at bay to take the chequered flag in first position, with Palmer rounding out the podium positions in third to take his first podium of the season.

Defourny had to settle for fourth position, followed by the Tech 1 Racing pair of Dorian?Boccolacci, who started way down in 17th place, and Sacha Fenestraz in fifth and sixth place respectively.

Robert Shwatzman?had earlier held fifth and started to create a train of drivers behind him in Fenestraz, Gabriel Aubry and?Nikita Troitskiy. But it wasn?t long before the train of cars ended up covering the positions all the way down to 10th as Shwartzman aggressively defended from those behind him.

With the six cars all battling together, something had to give as Aubry dived down the inside of Troitskiy into turn 9 and the pair collided. Aubry continued albeit way down the field and Troitsky retired on the spot.

Shwartzman ended up down in seventh, with Ferdinand Habsburg benefiting from the earlier incidents to finish eighth. The final points paying positions went to Julien Falchero, and Euroformula Open regular Antoni Ptak.