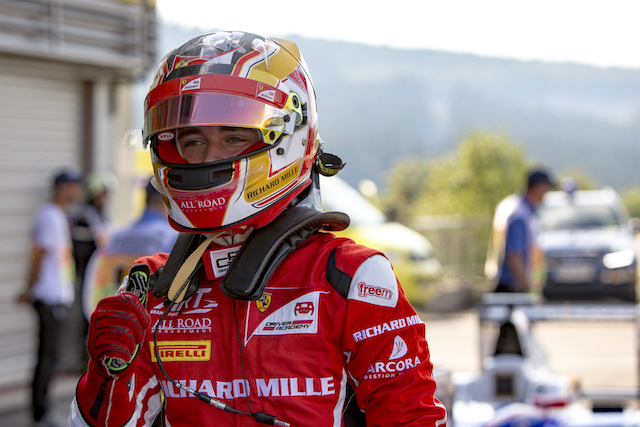 GP3 leader?Charles Leclerc?boosted his title hopes with pole position at Spa-Francorchamps, as rival and team-mate?Alex Albon struggled to 17th.

After Nyck de Vries led?after the first runs, practice pacesetter?Jake Hughes went over a second quicker inside with a few minutes left.

However, Leclerc was following him closely on track, potentially even picking up a tow through the final lap, and bettered the Briton’s time by 0.363 seconds.

The Monegasque driver gains four bonus points for pole and will line up 16 places ahead of his nearest title rival Albon.

The Anglo-Thai driver, who had been three points behind Leclerc coming into the weekend, had an off through the gravel on the exit of Fagnes on his final effort, and could only manage 17th, 1.5s down.

Qualifying inside the top 10 for the first time since he joined DAMS team-mate Hughes on the front row at the season opener at Barcelona,?Kevin Jorg claimed fifth ahead of?Matt Parry.

After making the top 10 on his first drive of a GP3 car in Friday practice, Koiranen debutant?Niko Kari?ended up 21st of the 23 drivers.