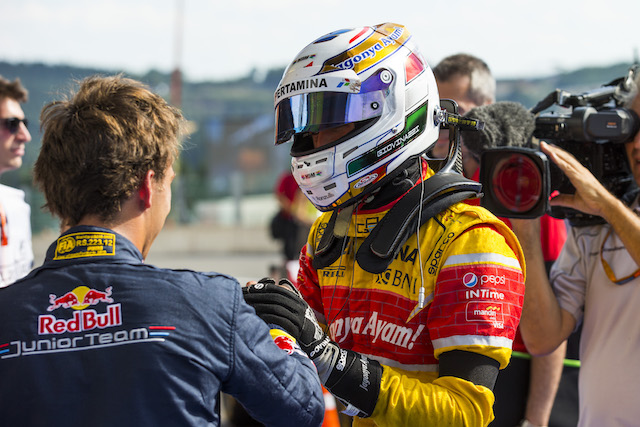 Antonio Giovinazzi produced the latest stunning?performance of his rookie GP2 season by defeating team-mate?Pierre Gasly in an all-Prema scrap for pole at Spa-Francorchamps.

Gasly had?controlled most of the session and improved his time on his second run to move over three tenths of the field, but Giovinazzi went even faster soon afterwards, 0.161s quicker than the Frenchman.

With the soft tyres only really good enough for one flying lap of the longest circuit on the calendar, that settled the pole fight. Taking his second pole of the year, Giovinazzi was over half a second clear of the best non-Prema car.

That honour went to?Gustav Malja, who went out earlier for his second run and made use of the clear track ahead of him to came close to matching Gasly’s initial benchmark and finish up third, one year on from his points-scoring GP2 debut at?the Belgian track.

Racing Engineering drivers?Norman Nato and?Jordan King were next up, split by two tenths and just ahead of Malja’s Rapax team-mate?Arthur Pic in the Italian squad’s most competitive showing to-date this season.

Sergey Sirotkin, who leads the standings on equal points with Gasly, had a torrid session, starting when he understeered wide on his first effort. He finished up 13th.

That was two places ahead of Oliver Rowland,?the slowest?of the championship’s top five, who are covered?by only 14 points.