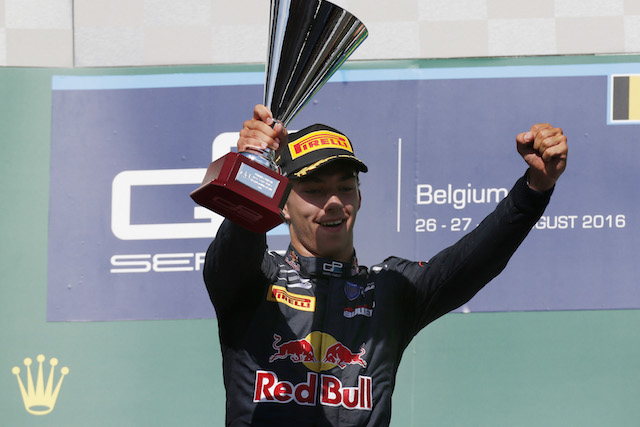 Pierre Gasly?has scored his third GP2 feature race win in the space of four events at Spa-Francorchamps to extend his points lead.

Gasly benefitted from a poor start for his pole-sitting Prema team-mate Antonio Giovinazzi, but it was actually a flying Gustav Malja who shot into the lead into La Source from third on the grid.

The Swede, 12 months on from his series debut at the Belgian track, retained the lead through the early laps, but a wide?moment at Pouhon helped Gasly to cut the gap and the Red Bull Junior swept past on DRS along the Kemmel Straight on the following tour.

Norman Nato performed a similar move on Malja one lap later, and then?Jordan King got ahead of the Rapax driver when they pitted together.

A great out-lap on fresh tyres from King allowed the Briton?to take the virtual?lead when Gasly rejoined from his stop, but the Frenchman soon reclaimed the initiative.

Gasly moved back into the proper lead once those starting on the hard tyres had pitted, and he was able to open up an 11-second lead over King late on.

He was aided rather than hindered by a late-race virtual safety car, when Nato’s car came to a grinding halt out of third place exiting the chicane.

That promoted?Alex Lynn onto the podium from eighth on the grid. The DAMS driver got a great launch at the start, but when then hit by Giovinazzi at La Source as the Italian tried to recover from the huge wheelspin he got off the line.

Raffaele Marciello continued his consistency with?fourth ahead of Russian Time team-mate Artem Markelov, who charged up the order in the closing laps having led a large part of the race on the hard tyres.

Giovinazzi took sixth in front of?Luca Ghiotto and Malja, who quickly dropped back on the hard tyres late on but did at least salvage reverse-grid pole.

Behind him there was a titanic scrap late on, with?Sergio Canamasas trying to defend ninth from a duelling?Sergey Sirotkin and Oliver Rowland.

Rowland got ahead of the Russian with some bold driving at?Les Combes, only for Sirotkin to regain the position there on a later lap when Rowland was held up behind Canamasas.

On the final lap, the trio?went in to Eau Rouge almost together, with Rowland just holding back slightly to sweep ahead of Sirotkin along the Kemmel Straight.

The Briton then attacked Canamasas at the Bus Stop chicane for the final time, looking to the outside but being forced on track. As he tried to rejoin he made contact with the Spaniard, and with the pair locked together, Sirotkin was able to grab ninth. Despite a puncture and front wing damage, Rowland just held on to 10th ahead of?Nobuharu Matsushita?with Canamasas falling to 12th.

With Sirotkin only ninth, having qualified 13th, Gasly moves into a lead of 23 points.