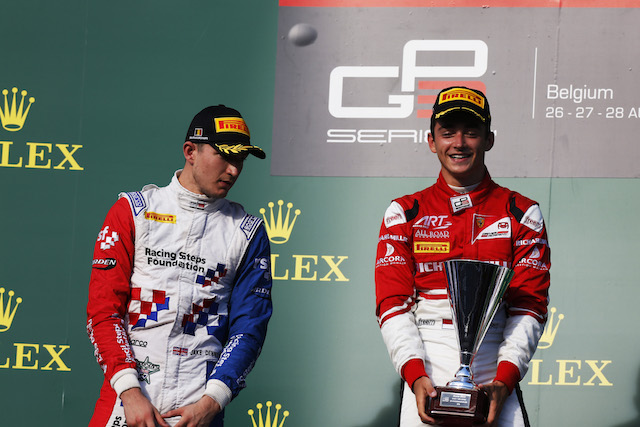 Charles Leclerc stretched his GP3 points lead with victory from pole position in the opening race at Spa, staying out of reach of a charging?Jake Dennis.

While Leclerc retained the lead at the start, fellow front row starter?Jake Hughes made a slow?getaway and was then involved in a crash with?Arjun Maini and?Matt Parry as they tried to run three wide on the exit of the first corner, triggering a safety car.

After the restart, Leclerc led?Nyck de Vries,?Antonio Fuoco and Dennis, who had managed to climb from 13th on the grid to fourth at the start as he avoided the incident.

With Pirelli nominating the soft compound tyre for Spa, high temperatures made tyre wear?a factor as the race went on. This played into Arden driver Dennis’ hands, and he was able to make light work of Fuoco and de Vries to get second.

Leclerc had enough in hand however, beating the Briton to the finish line by 2.3 seconds, while De Vries completed the podium 13s further back.

Fuoco took fourth, just holding off?Jack Aitken at the line, benfiting like Dennis from Arden’s seemingly superior tyre management to come from outside the top 10 after the restart.

Starting down in 17th, Alex Albon spent much of the race behind Aitken but lacked the same speed advantage late on and had to make do with ninth behind?Steijn Schothorst,?Santino Ferrucci and?Matevos Isaakyan.

Giuliano Alesi navigated the first corner carnage well to get up into the top 10 and remained there for his first GP3 points.

Alex Palou had been sixth behind Campos team-mate Schothorst but dropped like a stone to 14th by the end.

On his debut,?Niko Kari climbed as high as 13th before suffering a puncture, potentially after being hit from behind by?Tatiana Calderon at La Source.