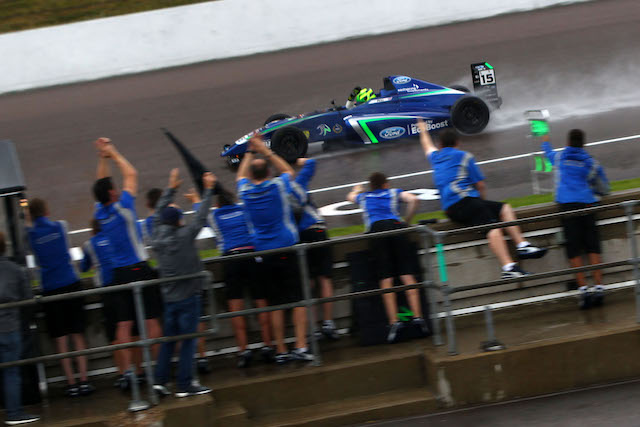 James Pull claimed a long-awaited first British Formula 4 win in the opening race of the weekend at a wet Rockingham.

In the week in which it was announced Pull would make his BRDC British Formula 3 debut with Carlin next month, the 16-year-old began the day by securing?his maiden pole in a dry qualifying session where the top four were covered?by 0.083 seconds.

In the wet race, fellow front row starter Alex Quinn pulled alongside through the first corner, but Pull managed to remain ahead.

The gap between the pair remained small in the early stages, but Pull was then able to pull away, finishing five seconds clear as he secured?his first win on his 52nd start, having taken 10 previous podiums.

Quinn had to hold off?championship leader?Max Fewtrell to remain second, the Carlin driver having worked his way up the order after dropping from fifth to sixth on lap one.

Jamie Caroline made even more impressive progress to get fourth, up from 18th on the grid. He passed?Sennan Fielding around the outside of Tarzan to secure P4.

After their Knockhill fracas,?Petru Florescu and?Devlin DeFrancesco both failed to finish, this time after separate incidents.