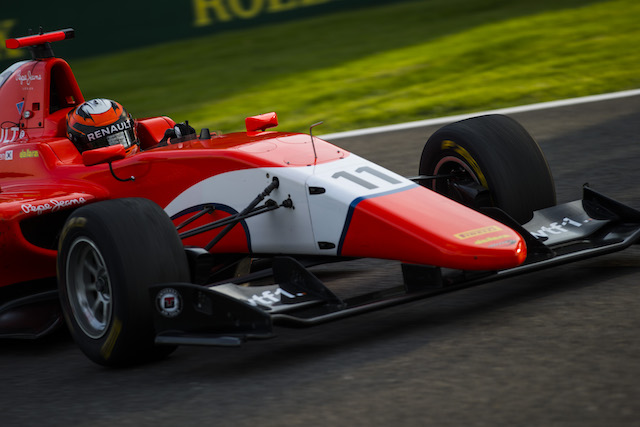 From fourth on the grid, the double 2015 Formula Renault champion quickly climbed?to second, and took the lead away from?Matevos Isaakyan?into Les Combes just before the safety car neutralised the field so the car of?Konstantin Tereshchenko could be recovered after a puncture-induced off.

At the restart, Britons?Jake Hughes?and?Matt Parry collided at Les Combes to cause another safety car, and a similar incident involving Nirei Fukuzumi and?Kevin Jorg produced a similar result later on.

Aitken was never really threatened at any of the restarts, with the action going on just behind him.

Santino Ferrucci took second away from Isaakyan at Les Combes, and the Russian’s attempts to hold on to the place led to him being pushed off the podium by?Antonio Fuoco, who went on to take second away from Ferrucci.

Jake Dennis managed to get up to fifth, displacing?points leader?Charles Leclerc when the Monegasque ran deep at the Bus Stop chicane for the final time in a last-ditch attempt to take fourth from Isaakyan.

Steijn Schothorst held off fellow Dutchman?Nyck de Vries for seventh, while?Alex Albon completed a poor weekend in his title charge with 10th behind Artur Janosz, having been shoved onto two wheels when he was hit from behind by an understeering?Arjun Maini?at the Bus Stop.