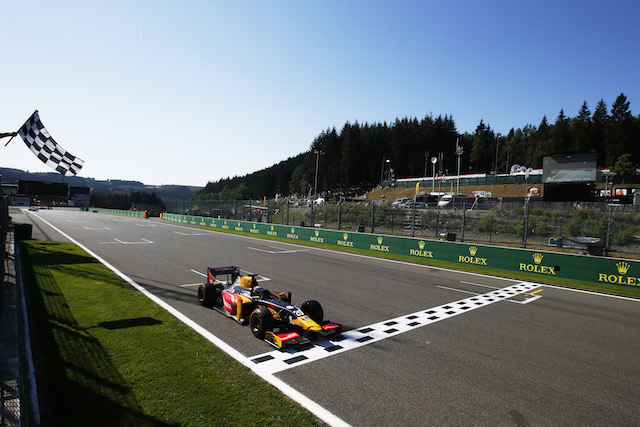 Antonio Giovinazzi scored the?third win of his rookie GP2 season and completed a double victory for Prema at Spa with a sprint race triumph.

As in the feature race,?Gustav Malja led early on, having made a good start from pole position, while Giovinazzi moved past fellow Italian?Luca Ghiotto for second off the line.

Malja seemed safe in the lead through the early laps but Giovinazzi got close enough on the Kemmel Straight on lap eight to challenge into Les Combes, sweeping around the outside of the right-hander to snatch the lead.

After that he opened up a 2.3s margin over the Swede, as his team-mate and feature race winner?Pierre Gasly created much of the action behind.

The Frenchman hadn’t made the best start and lost part of his front wing against?Oliver Rowland after being passed the Briton, also falling behind?Sergey Sirotkin.

He repassed the Russian by taking a tight line at La Source that also allowed him to pull alongside Rowland into Eau Rouge, emerging ahead of his long-time rival.

That simply got him back to where he started in eighth, but he quickly progressed up the order from there, picking off?Alex Lynn,?Jordan King,?Artem Markelov and?Raffaele Marciello.

He came close to the podium in the end, finishing just half a second behind Ghiotto.

While Marciello finished fifth, Markelov struggled late on, with Lynn instead beating King to sixth. Markelov was at least poised for the final point in eighth as he coasted through the Bus Stop for the final time, but he was punted around from behind by compatriot Sirotkin as the ART driver duelled with Rowland on the brakes, and was unable to resume.