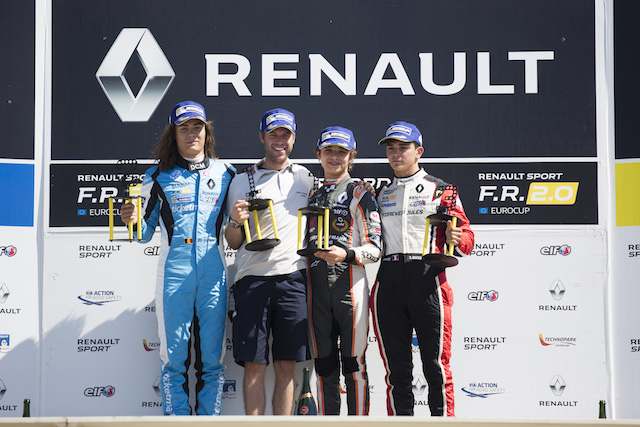 Lando Norris has taken his fifth win of the season in the second Eurocup Formula Renault race at Paul Ricard.

After making a good getaway at?the start, the championship leader was unchallenged as he set fastest lap after fastest lap on his way to the finish line.

When the lights went out, Norris led the pack away with Max Defourny trying and failing to get passed the Brit into turn one. With Defourny all out of shape, it allowed third place starter Dorian Boccolacci to pass the Belgian driver on this inside of the turn two chicane.

Boccolacci?s time in second position was short lived as he made a mistake into the Mistral chicane, allowing Defourny to get back alongside and then passed by turn five. Behind them, Harrison Scott made his way passed Gabriel Aubry out of turn five to put himself up into fourth position. Robert Shwartzman would then be the next driver to make a move out of turn five, taking tenth position away from the R-ACE GP driver.

With Norris several seconds down the road and Defourny seemingly all on his own in second, it was the Tech 1 Racing car of Boccolacci that was beginning to form a train behind him. With the cars from third to 11th all bunched together, it allowed Palmer to regain tenth position back from Shwartzman. The Russian driver tried his best to get back ahead into turn one but Palmer held him off to keep the position.

With only ten minutes left on the clock, Defourny was visibly struggling to catch back up to Norris, and was instead now falling back into the clutches of Boccolacci and the train behind him. But it all went wrong for Scott, who spun all on his own coming out of the long right hander of turn five. He was able to rejoin without much hassle but was now way down in ninth position and right in front of Palmer.

But nothing was going to stop Norris from taking the win by a good four seconds by the chequered flag. Defourny was able to hold off the late charge from Boccolacci to come home in second position. Aubry inherited fourth place from Scott, with his team mate Sacha Fenetraz finishing behind him in fifth position making it a Tech 1 Racing 3-4-5 finish.

Ferdinand Habsburg and Jehan Daruvala swapped around from their starting positions to finish in sixth and seventh respectively with the final points paying positions going the way of?the final Tech 1 Racing car of Hugo de Sadeleer in eighth, Scott in ninth, and Palmer rounding out the top ten.