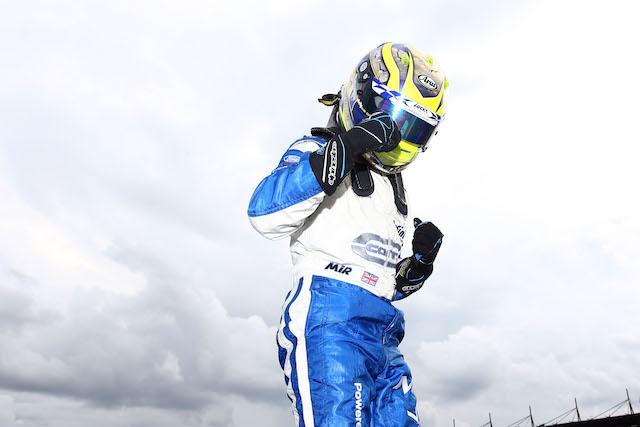 Max Fewtrell grabbed a last-lap second win of the British Formula 4 season in the final race at Rockingham to extend his points lead, after?Sennan Fielding had triumphed in race two.

Contact between Kjaergaard and Martins had promoted Jamie Caroline?and Fewtrell up to third and fourth behind Leeds, and Fewtrell grabbed third at the first of two safety car periods. He finished just a second behind the winner Fielding, with Leeds halfway between the two.?James Pull took fifth on the road behind Caroline, but an exclusion for passing under safety car promoted?Alex Quinn.

Billy Monger started race three from pole and the Ginetta Junior graduate remained out front until the final lap, keeping both Fewtrell and Fielding behind him.

However, he was denied a first win when his car slowed suddenly out of the Deene hairpin for the final time, instantly dropping him to third.

Fewtrell’s win came despite having briefly fallen back to fifth on the first lap, while Fielding came from sixth on the grid and moves up to second in the standings, 24 points behind Fewtrell with two rounds remaining.?He got ahead of Red Bull Junior Leeds, who salvaged just one point in 10th after qualifying 13th.