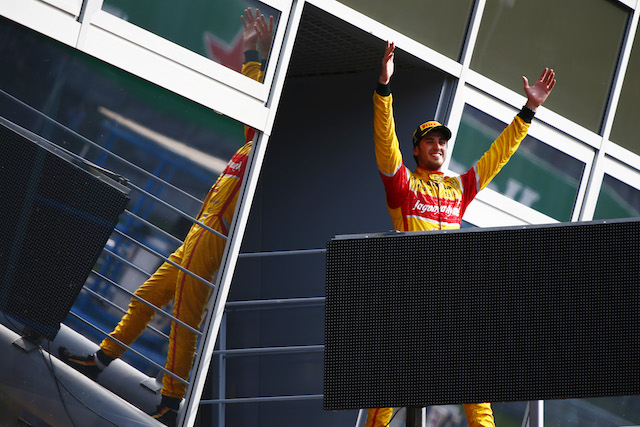 Antonio Giovinazzi recovered from a qualifying exclusion to beat?Raffaele Marciello?on the final lap to a home GP2 feature race win at Monza .

Giovinazzi, who was narrowly beaten to the best time in qualifying by Prema team-mate?Pierre Gasly?before being sent to the back of the grid for a tyre pressure infraction by the team, benefitted along with Marciello and?Gustav Malja from a safety car mix-up in the middle of the race.

Gasly had survived?contact from a locked-up?Artem Markelov at the first corner to lead early on, then resisting pressure from?Arthur Pic, who had been forced into the run-off by Markelov at the start.

After pitting, Pic collided with?Sergio Canamasas at the second Lesmo, pitching the Spaniard into a roll through the gravel trap and triggering the safety car period.

Starting on the medium tyres, Marciello, Malja and Giovinazzi had not yet pitted, and nor had?Nobuharu Matsushita, who was ahead of them.

With the safety car delaying the rest of the pack, the front three were able to make their pit stops and rejoin at the back of the field, almost a lap up on the rest.

The rest of the field – headed by Gasly – was eventually released and allowed to catch the leaders prior to the restart, and Gasly came close to passing Giovinazzi at the first corner.

Giovinazzi stayed ahead however and?went on the attack instead, passing Malja onto the penultimate lap and closing on Marciello when the leader appeared to run?wide at the second Lesmo.

He then used the DRS to charge past Marciello before the braking point for the first corner on the final lap, securing the fourth win of his rookie GP2 campaign.