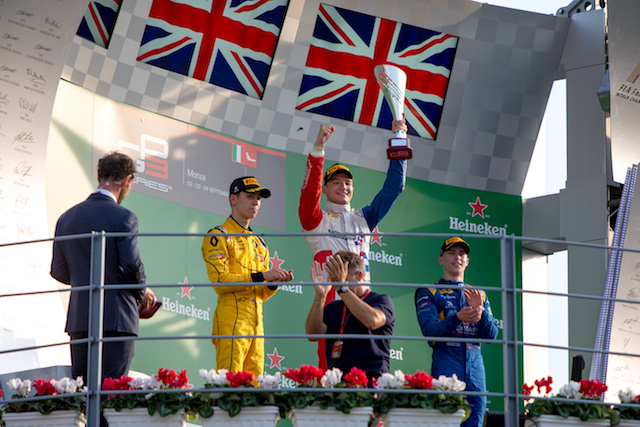 Jake Dennis claimed his maiden GP3 victory in the opening race at Monza as?Jack Aitken and a charging?Jake Hughes made it an all-British?podium.

Dennis took the lead away from?Charles Leclerc on the brakes for the first chicane on lap five, with the championship leader largely leaving the door open for the late-braking Arden driver.

His team-mate Aitken followed him through a lap later, but was never really able to challenge Dennis for the win, with nearly two seconds separating them at the flag.

Hughes started eighth on the grid, three places lower than he had qualified after a grid penalty for contact at Spa, but carved his way through to take third for DAMS, finishing only half a second back from 2015 team-mate and rival Aitken.

ART’s drivers lacked the race pace of the podium trio but locked out positions four to seven, with Leclerc,?Nirei Fukuzumi,?Alex Albon and Nyck de Vries finishing nose-to-tail as the squad wrapped up their sixth?teams’ title from seven seasons with five races still to go, sitting on 442?points to nearest rival?Arden’s 173.

Despite falling from first to fourth in the race, Leclerc finished ahead of his main title rivals Albon and?Antonio Fuoco

Fuoco climbed up from seventh in the first half of the race to challenge Ferrari stablemate Leclerc, and?the pair made?wheel-to-sidepod contact under braking as the Monegasque driver defended into the Roggia chicane.

The incident was investigated but no further action taken, and Fuoco faded to a distant eighth, but will at least start the second race from pole at home.

Matt Parry rose to ninth from 17th on the grid, while?Tatiana Calderon joined her Arden team-mates in the points in 10th after starting 15th.