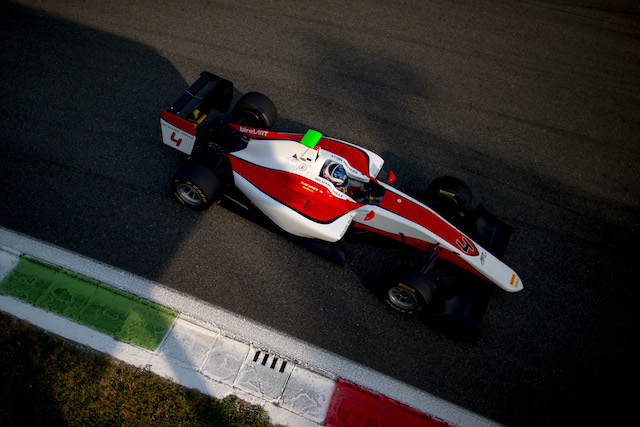 Nyck de Vries picked up?his first GP3 victory in the second race at Monza, as Charles Leclerc was forced out by a collision with team-mate?Nirei Fukuzumi.

The race was essentially all about the ART quartet, with?Alex Albon and de Vries working their way into first and second early on past Trident’s?Antonio Fuoco.

Fukuzumi had successfully fended off Leclerc for fifth around the outside of the Roggia chicane on lap three, but ran wide over the kerb on exit and chose to move to the inside to defend further.

There was little to no overlap when Fukuzumi began to move across, but while he continued to come to the right, more of the faster Leclerc’s car came into the gap and the pair collided, sending Fukuzumi into the barrier and Leclerc into the gravel at the first Lesmo with broken steering, where he was joined by Fukuzumi and an innocent?Tatiana Calderon.

A safety car period followed, and at the restart de Vries was able to pass Albon for the lead and the victory into the Roggia chicane.

Fuoco took third ahead of the top two from race one, Arden duo?Jake Dennis and?Jack Aiken.

Arjun Maini claimed sixth after battling his way past?Alex Palou, while the top 10 was completed by?Artur Janosz,?Ralph Boschung and?Jake Hughes, who fought back from an early coming together with Aitken.