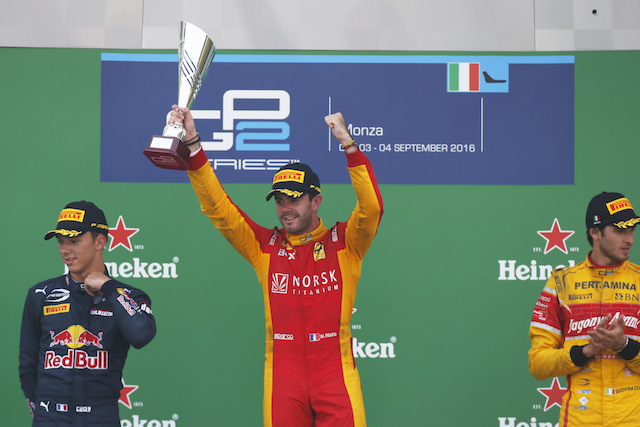 Norman Nato?won the GP2 sprint race at Monza,?returning to the top step of the podium for the first time since his win in the season opener at Barcelona.

The Frenchman shot from fourth to first by the first corner, down the inside of his Racing Engineering team-mate?Jordan King who had started directly in front of him.

King later succumbed to Prema pair?Pierre Gasly and?Antonio Giovinazzi but Nato remained out of their reach, winning by four seconds.

Mitch Evans started on reverse-grid pole but was swamped after a poor getaway and collided with third-place starter?Luca Ghiotto, with the pair somehow continuing unharmed.

Both however were then turned around in separate simultaneous incidents at the Roggia chicane, ending their races.

Ghiotto on the outside of the corner entry was tipped into a spin by?Oliver Rowland, while Evans was turned around mid-corner when?Gustav Malja flew over the inside kerb. Malja also forced a faster Giovinazzi into the gravel on the exit, the Italian losing part of his front wing.

Giovinazzi did eventually pass the Swede and also caught and passed a struggling King to follow his feature race win with a sprint race podium, keeping himself within 10 points of leader Gasly with two rounds remaining.

Malja also managed to pass King on the final lap, but a 10-second penalty for the Evans clash relegated him to ninth, missing out on the final point by 0.023 seconds.

King was attacked by?Artem Markelov?on the final lap but held on to fourth by 0.038s, while the gap between?Alex Lynn and?Nobuharu Matsushita for sixth was only one hundredth of a second, Lynn nosing ahead after Matsushita’s attempts to get in on the King-Markelov fight cost him speed into the Parabolica.

With Rowland relegated to 11th by a penalty for his Ghiotto tangle, it was?Nicholas Latifi who denied Malja the final point, scoring his first since Spielberg.