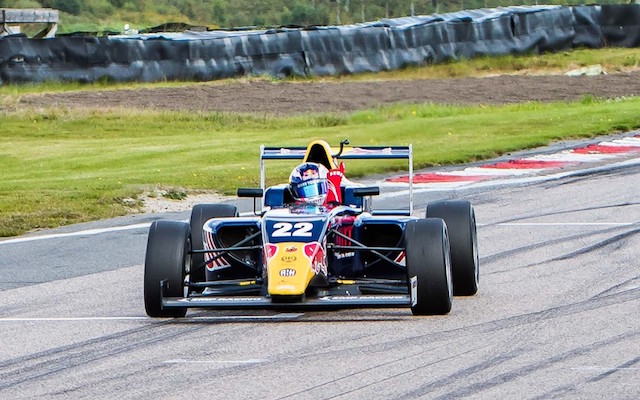 Fifteen-year-old Red Bull Junior Richard Verschoor has secured the SMP F4 NEZ Championship title in advance of the final round after continuing his winning streak in Sweden.

The Dutch ace has now won 15 races in a row across the Koiranen-operated NEZ and Spanish series after a third straight?hat-trick in the former category at?Anderstorp.

He missed out on pole for the series’ first race in Sweden, pushed down to third when others improved at the end of a drying qualifying session.

That didn’t matter once those two drivers – his title rival?Jarno Opmeer and?Roope Markkanen – collided at the first corner, clearing the way for Verschoor to win by three seconds in front of Finns?Tuomas Happalainen and?Juho Valtanen.

That?top three was replicated on the grid for race two, and the lead trio remained in formation until the end.

Relegated to 11th by a penalty for his early?clash, Opmeer fought his way onto Valtanen’s tail in race two, only for another penalty to drop him to ninth.

Opmeer qualified on pole again for the finale – edging out Verschoor by 0.015s – but?made a poor start, handing his rival a dominant win by nearly 10 seconds over Alexander Vartanyan.

Opmeer had been close to Vartanyan when he crashed out on the penultimate corner of the race, ending his championship chances.