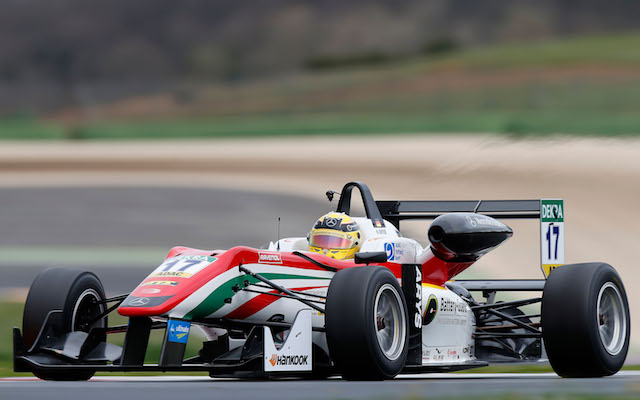 Following on from his botched start from pole in race two, Gunther led this one from start to finish, but was never able to escape from fellow front-row starter Cassidy.

He did extend his gap to just over a second with around 10 minutes remaining but Cassidy came back on a charge before the finish, with less than four tenths between them with two laps to go.

Gunther seemed to build a safe gap on the penultimate tour, but by the final corner of the race Cassidy was close enough to launch his car down the inside. The pair banged wheels and Gunther was sent wide, but floored the throttle to rejoin ahead and win the race.

Cassidy’s second-place was his third of the weekend. He’s the championship leader after the opening round on 54 points, with his team-mates Gunther and?Lance Stroll his nearest rivals on 35.

Joel Eriksson had a superb race to end a bright first weekend in F3 with a podium finish. The Swede put moves on?Ralf Aron?and?Mikkel Jensen in quick succession in early in?the race and kept with the lead pair for the remainder, finishing just a second behind.

Jensen lacked the pace of the leaders but held onto fourth?under sustained pressure from Stroll.

With Aron falling back,?Harrison Newey was on course to conclude a promising first F3 event in sixth place until a late challenge from his Van Amersfoort team-mate?Anthoine Hubert.

The pair went side-by-side through the?right-left sweepers at the end of the lap and Newey spun off on the outside of the left-hander. The incident is under investigation, but it’s unclear whether there was actually any contact.

While Newey finished down in 14th, Hubert picked up sixth in front of Aron,?Guan Yu Zhou?and?Alessio Lorandi.?Nikita Mazepin scored a point on his debut F3 weekend in 10th ahead of HitechGP team-mate Ben Barnicoat.

Having been relegated to 11th on the grid for causing the incident at the start of race two, Barnicoat was involved in another scrappy start in race three, running wide at the first corner together with?Sergio Sette Camara, who later retired having been launched onto two wheels in the process.

Race two winner?Callum Ilott got a dreadful start from third on the grid and finished 12th after a late bid to pass Barnicoat led to him running deep. The other Hitech car of?George Russell was the last finisher on the lead lap after pitting for a front-wing change.