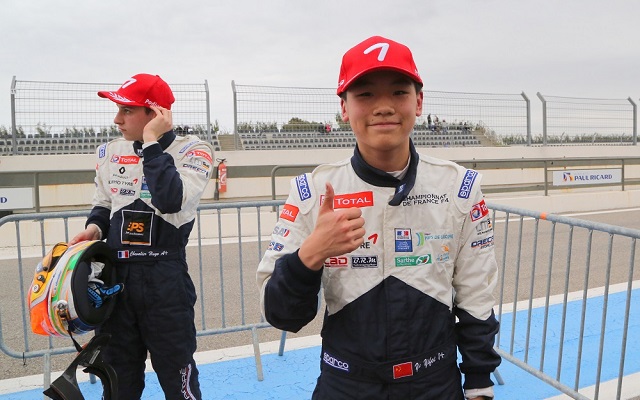 15-year-old youngster Ye Yifei?completed a perfect weekend in the first French F4 round at Paul Ricard, winning four out of four races.

The first of two Sunday races were held on a greasy track but the field kicked off the race on slicks.

Pole-sitter Yifei’s lead was up to 1.5s in just one lap and continued to edge away to win by 5.2s.

The latter led a train of six cars behind him as Gilles Magnus, Enzo Samon, Arthur Rougier, Jean-Baptiste Mela and Marvin Klein completed the top 10.

Michael Benyahia, twice third yesterday, was forced to start from the pits and could only recover to 11th.

Yifei proved to be unbeatable in the final race as well, beating Chevalier and Charpentier by four and six seconds respectively.

Cobian impressively fought his way up to fourth from last on the grid, stealing the spot from Jean in the final race.

Rougier was sixth, just ahead of Magnus and Mela as Samon and Casper Roes made up the top 10.