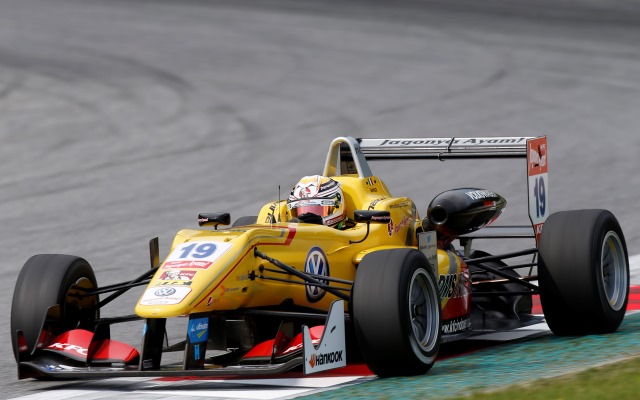 Antonio Giovinazzi claimed victory in the second FIA F3 European Championship race at the Nurburgring after Max Verstappen retired from the lead with a car problem.

Pole-sitter Tom Blomqvist got a poor start and dropped to third behind Verstappen and Giovinazzi. Verstappen was never able to pull away up front, with Giovinazzi, Blomqvist,?Esteban Ocon and?Antonio Fuoco all lapping within four seconds.

Verstappen withstood the pressure for 19 laps and a half laps but then slowed on the run to the chicane, losing the lead. He pulled into the pits, but stopped before he could make it to the Van Amersfoort Racing garage. It was far from the first such issue Verstappen’s Dallara-Volkswagen has suffered this year.

It enabled Giovinazzi to score his second win of the season, and his second in the space of three races. Blomqvist finished 0.771s behind in a Jagnoya Ayam with Carlin one-two, while Ocon completed the podium. Having been faced with again finishing down the order as his main rival Verstappen took victory, he instead increased his points lead from 77 to 92.

Fuoco was fourth ahead of Lucas Auer, Jordan King and Felix Rosenqvist, with the top seven covered by just seven seconds. A bit further back was Ed Jones in eighth, Tatiana Calderon ninth and Nicholas Latifi tenth.