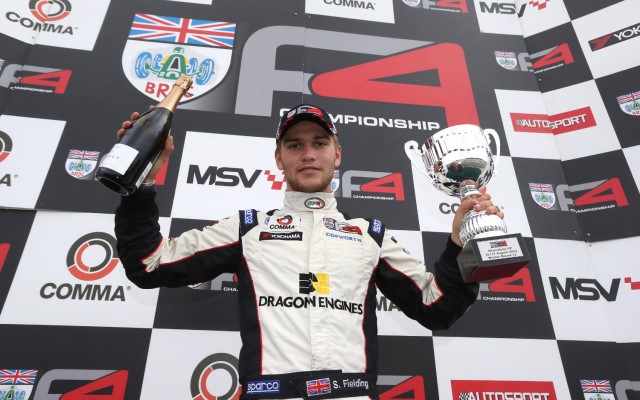 Sennan Fielding claimed victory again at round five of the BRDC F4 Championship at Silverstone as he charged from eighth on slicks on a drying track in race two of the weekend.

Just as in race one, Fielding won less than two tenths of a second after surviving a last lap attack, this time with Brazilian rookie Gaetano Di Mauro.

The main difference on this occasion was that instead of leading from pole position, Fielding came from eighth on the reverse grid. Up front, pole-sitter Rahul Mayer led until being passed on lap two by fellow wet-shod driver Raoul Hyman. Hyman’s championship rival George Russell nosed ahead crossing the line at the beginning of lap four but Hyman retained the place.

However, after starting 11th, Di Mauro was now up to second and lapping much faster than Fielding. By the start of the ninth and last lap he had caught the leader and would move ahead on the Wellington Straight, but Fielding regained the lead and crossed the finish line 0.157s ahead.

Fielding will have the chance to become the first driver to win all three races in a BRDC F4 weekend, with his fastest lap from race one enough to secure pole position for race three.

Will Palmer also charged to the front on slicks, going from 20th on the grid after his race one retirement to take third on lap six, going on to finish within three seconds of the winner.

Telmex-backed Rodrigo Fonseca came through from 15th to fourth, just ahead of Tom Jackson who pitted at the end of the formation lap to fit slicks.

Championship leader Russell won his battle with Hyman to be the best of the wet tyre runners in sixth, ahead of Arjun Maini, Mayer and Diego Borrelli.