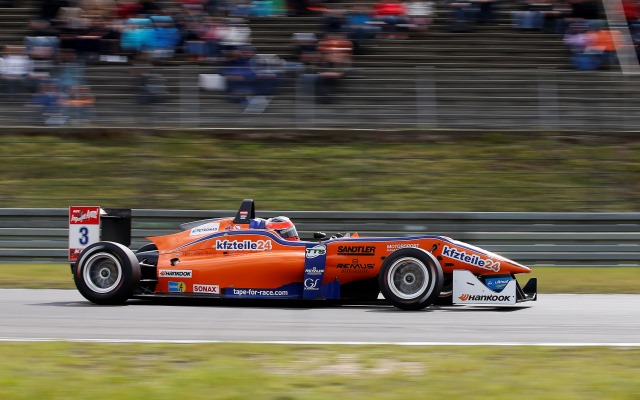 Lucas Auer claimed his second win of the FIA F3 European Championship season and his first for 23 races as he defeated Tom Blomqvist to take the honours in the third and final encounter of the weekend at the Nurburgring.

There was carnage at the first corner, as pole-sitter Blomqvist and the fast-starting Felix Rosenqvist made contact at the apex of turn one, forcing Rosenqvist to pit for a replacement front wing, and behind, Esteban Ocon and Antonio Giovinazzi came together and were collected by?Nicholas Latifi. The latter three were all forced out of the race together with Dennis van de Laar, and the safety car was called.

At the restart, Auer attacked Blomqvist for the lead, hanging around the outside of turns two and three and then completing a fine move with the inside line at the turn four right-hander. A few laps later, Blomqvist dived down the inside of Auer at turn one but ran deep, enabling Auer to retain the lead.

Blomqvist then dropped two seconds to the Austrian on that lap, but he was able to reduce that gap again over the remainder of the race and catch Auer again in the closing stages. Light rain began to fall, but Auer held on to take his first win since Hockenheim in May.

Max Verstappen completed the podium after a ten-place grid penalty for an engine change following his race two failure left him starting 12th. He avoided the first lap chaos to get up to fifth, and took fourth from Jordan King at the restart. He then went after front row starter Antonio Fuoco, and the two banged wheels at turn two.

Verstappen appeared to have sustained damage in the contact as that was as close as he got to passing Fuoco for some time, but he finally got by at turn one for the penultimate time. Matching Ocon’s race two result brings the gap between the pair back down to 77 points – a gap that Verstappen will need to reduce further next time out to prevent Ocon wrapping up the title.

Fuoco held off King for fourth, some way ahead of an eventful scrap for sixth. Felix Serralles held the place early on but lacked pace, with a train of eight cars forming behind him. Eventually, Roy Nissany was able to get by the Puerto Rican. Tatiana Calderon beat Jake Dennis to eighth and Jules Szymkowiak completed the top ten.

At the back of that train, a recovering Rosenqvist attempted to take 13th from Spike Goddard, but after being forced onto the grass, he then needlessly pushed the Australian into a spin at turn five. The frustrated Swede sustained a broken front wing for the second time in the race, leading to his retirement, while Goddard received a drive-through penalty for forcing Rosenqvist off track.

Ed Jones missed the race after suffering a recurrence of the back injury that kept him out for four rounds in the middle of the year.