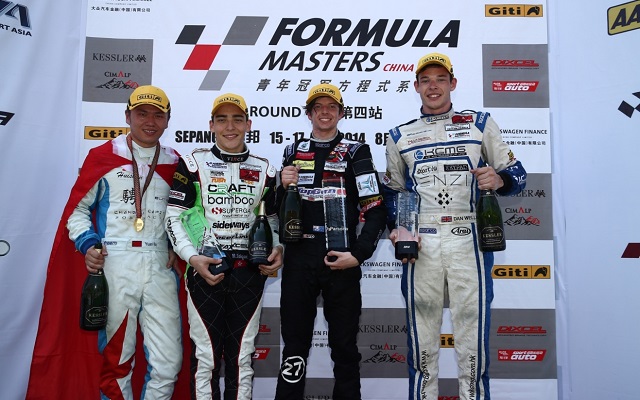 Australian racer Jake Parsons secured the win in the final race of his debut weekend in the Formula Masters China Series at Sepang.

Parsons, who started the race from third on the grid, was up to second past Dan Wells off the line and then went on to catch polesitter Matthew Solomon.

The Hong Kong driver managed to keep Parsons at bay until lap five, but finally caved in, allowing the Aussie to run away with the race.

Parsons’ victory in FMCS was his fifth at Sepang this year as he had previously dominated all four races of the AsiaCup opener at the track.

Solomon came under pressure from Wells shortly after losing the lead, but was allowed breathing room when the Brit spun out, falling into fourth behind championship leader James Munro.

Wells then recovered and overtook his KCMG teammate Munro on lap eight to claim the final podium spot.

Munro settled for fourth – his first finish outside of the top three in the series – which allowed him to maintain a 14-point lead in the standings over Solomon.

Yuan Bo originally finished eighth on the road, but was handed a time penalty for jumping the start. As such, Mandla Mdakane, Pu Jun Jin and Ronald Wu completed the top ten.