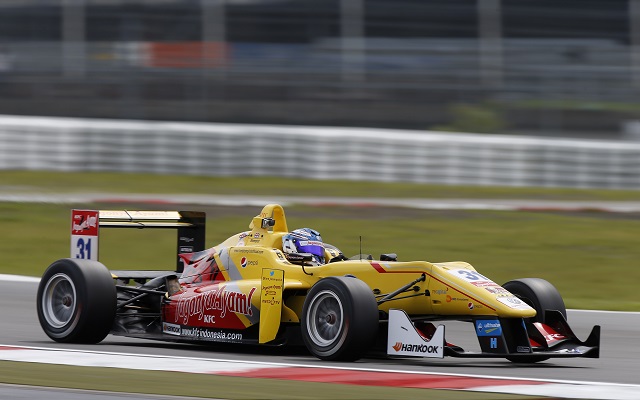 Jagonya Ayam with Carlin driver Tom Blomqvist will start both Sunday races of the FIA F3 round at the Nurburgring from pole position.

Blomqvist topped the 20-minute qualifying session, which had been postponed from Saturday evening due to lengthy barrier repairs.

Race one winner Max Verstappen and Blomqvist took turns leading the timesheets in the earlier stages of the session and it was the latter who sat atop the leaderboards when an off for Mucke’s Roy Nissany brought out the red flag.

Qualifying was restarted shortly thereafter but, despite a further six minutes of green flag running, improvements amongst the top ten were few and far between.

As such, whilst Verstappen and Blomqvist’s squadmate Antonio Giovinazzi managed to improve in individual sectors, they didn’t wind up bothering the Brit’s benchmark time, leaving him in first at the checkered flag.

The newly-appointed Red Bull junior Verstappen will line up on the front row for both races two and three, while Giovinazzi, who posted the third-best time overall, will be fifth on the grid of the final race of the weekend. Conversely, Prema’s Antonio Fuoco will start race three in third, but will only line up fifth for race two.

Late-session improvements from championship leader Esteban Ocon allowed him to move up to fourth on the grid for both Sunday races.

Mucke duo of Felix Rosenqvist and Lucas Auer took sixth and seventh overall, as Carlin drivers Jordan King, Ed Jones and Jake Dennis made up the rest of the top ten for race two. The latter half of the top ten will remains identical for the final race’s grid.