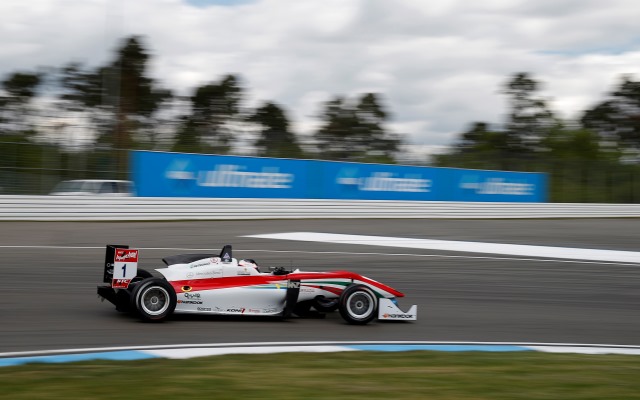 Starting from pole position, Rosenqvist kept the lead at the start and had opened up a nine-second lead by the end of the 22-lap race, despite being held up by a backmarker late on.

The result was the F3 veteran’s seventh win at the German circuit on his 28th start.

Unlike in race one, German prospect Maximilian Gunther was able to hold on to third place for much of the race, but the Mucke Motorsport driver eventually succumbed to the attention of championship leader Antonio Giovinazzi.

The Italian completed a move exiting the hairpin with less than five laps to go to keep up his 100 per cent podium record so far this season.

Callum Ilott lost fourth to team-mate Giovinazzi early on but still claimed his best result in F3 so far, while sixth was Santino Ferrucci‘s best finish of the season to date.

Markus Pommer had been due to finish seventh but his Motopark car suddenly slowed on the final lap, dropping him down to 17th.

That promoted Gustavo Menezes to seventh and Alex Albon to eighth. George Russell came from 18th on the grid to ninth, with he and Brandon Maisano managing to pass Mikkel Jensen as the race wore on.

Jake Dennis failed to get away for the formation lap from seventh on the grid, forcing him to start from the pits. He finished 15th, one place behind his Prema team-mate Lance Stroll who was relegated down the order by first-lap contact.