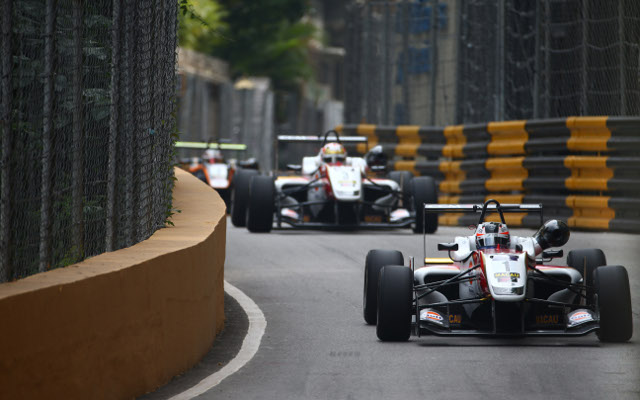 Felix Rosenqvist will bid for back-to-back Macau Grand Prix wins from pole position for the qualification race after topping an enthralling qualifying session.

There was drama before anybody had even set a time when Callum Ilott, after impressively being second to Rosenqvist on Thursday, crashed out at San Francisco and caused a red flag.

On the first lap after the restart, Rosenqvist went underneath his benchmark from the first session, and improved further on his next attempt.

He didn’t have it all his own way though, and his early-season nemesis Charles Leclerc was able to go one hundredth of a second quicker.

Rosenqvist reclaimed top spot with 10 minutes left though as the first driver to go into the 2m10s this week.

2011 winner Juncadella went second and came within 0.046s of Rosenqvist but the Swede then improved further to open up a margin of 0.213s.

That was just before Antonio Giovinazzi crashed at Hospital bend to trigger a red flag. There was 3m44s left on the clock, but with the programme having already been delayed by GT crashes, the decision was taken not to restart.

That left Rosenqvist on pole with his fellow past winner Juncadella alongside him, and Leclerc set to lead Giovinazzi off on row two.

Markus Pommer couldn’t find his pacesetting form from the earlier practice session and had to settle for fifth for Motopark, while Sam MacLeod proved his fourth place in Friday qualifying was no fluke as he set another quick time to be sixth for West-Tec.

The second-day improvement was such that Ilott’s Thursday time will only be good enough for 18th on the grid, but that will be six places ahead of 2014 podium finisher Nick Cassidy, struggling with TOM’s.