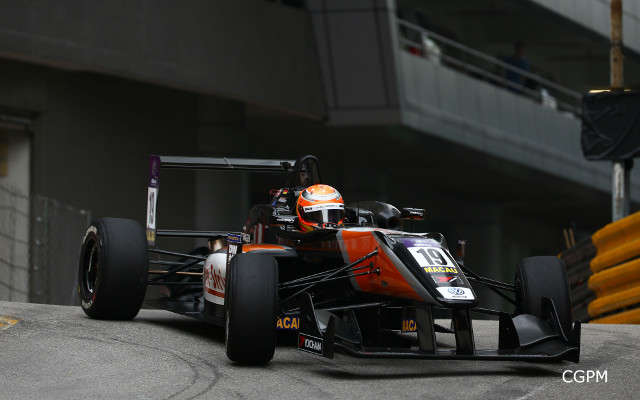 Rosenqvist led the way early on with a series of improvements but Pommer then took charge inside the second half of the session with a time of 2m11.688s.

He led through the session’s solitary red flag period and then set two faster laps either side of the chequered flag, working down to a 2m11.102s.

Rosenqvist and Charles Leclerc both went underneath Pommer’s earlier benchmark with late improvements but ended up three and five tenths down respectively.

Rosenqvist holds provisional pole ahead of the second qualifying session on a time of 2m11.841s.

Antonio Giovinazzi was eight tenths down in fourth as the last driver within a second of Pommer.

Lance Stroll recovered from losing his front wing when he nosed into the tyre barriers at the Melco hairpin prior to the red flag to take fifth late on, ahead of 2011 winner Dani Juncadella.

After a torrid Thursday, Jake Dennis showed some pace with seventh ahead of Mikkel Jensen.

Rounding out the top 10 were Sam MacLeod and Callum Ilott, who were the standout performers in first qualifying with fourth and second positions respectively.

It was Albon’s Signature team-mate Dorian Boccolacci who triggered the stoppage when he slid into the barriers at San Francisco after the rear of his car got away from him.

Another driver to hit the barriers was Hongwei Cao, who crawled his way back to the pits with two right-hand punctures after getting out of shape at Paiol.

Alexander Sims had his second unlikely drama of the weekend when he went deep at the top of Moorish Hill and stalled as he attempted to rejoin.