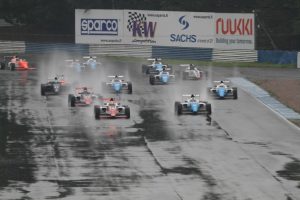 The Formula 4 North-European Zone and Formula Academy Finland championships shared grids at Ahvenisto in Finland in a reunion for SMP Racing and Koiranen.

F4 NEZ was started in 2015, with SMP Racing and the Koiranen brothers running the whole grid. Ahead of 2018, Koiranen split and formed their own Finland-based F4 championship, although still entered cars in F4 NEZ.

It was SMP Racing driver Michael Belov who was the star of the joint meeting, taking one win, three poles and an improved position in the standings of both championships.

Local driver and NEZ leader Konsta Lappalainen won the first race after beating Belov off the line, with much of the race spent behind the safety car to torrential rain. Belov’s team-mate Pavel Bulantsev completed the podium, just holding off Lappalainen’s Kart In Club Driving Academy team-mate Jesse Salmenautio.

The weather improved slightly for the second, meaning there was more on-track action. Tuomas Haapalainen used his local knowledge and wet weather skills to rise up the order to take victory by 3.426 seconds from Salmenautio.

Third place wasn’t decided until the very end, with Bulantsev prevailing over Lappalainen and poleman Belov.

Race three only counted towards the NEZ championship, and the dry conditions played into the hands of Belov. The Russian took pole in the morning and then dominated the race, putting over seven seconds between himself and Salmenautio.

Once again the battle for the last spot on the podium was intense, with Lappalainen edging Haapalainen to third. Isac Blomqvist, who led the NEZ standings earlier in the season, took his best result of the weekend in fifth.

Lappalainen’s NEZ lead has grown to 33 points, with Belov now his closest rival. MP Motorsport driver Blomqvist has dropped to third in the standings.

Haapalainen still leads the FAcademy Finland points, with Salmenautio and Belov hounding him at the top. Bulantsev and Lappalainen have jumped to fourth and fifth.

Casper Tobias Hansen got back to his usual winning best in Danish Formula 4’s second trip to Padborg Park.

Team FSP driver Hansen was the national Formula 5 runner-up in 2017, but looks to go one better this year after adding another two victories to his season tally.

He started the first race from pole, and took an easy win ahead of the sole Apex Racing car of Mikkel Grundtvig. Hansen’s team-mate Malthe Jakobsen took his first overall podium of the season in third.

In the remaining two races it was Casper Pilgaard who set the pace, but the Pilgaard Motorsport driver was denied a double win by Hansen. Pilgaard controlled the second race of the weekend, in which Hansen struggled to get past cars and finished fifth. Jonas Lindhard Nielsen and Valdemar Eriksen completed the podium.

Hansen and Pilgaard battled over the lead in the third race, with the end result going in Hansen’s favour by a slight 0.339s. Jakobsen took his second podium not far behind, with championship contenders Grundtvig and Aske Nygaard Bramming fourth and fifth.

Overall disappointing weekends for the two of them, coupled with a strong one for Pilgaard, means it is he who now sits second in the standings, with Bramming, Grundtvig and Nielsen covered by 13 points behind him.