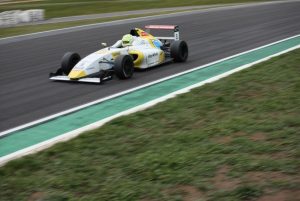 The first sessions of the weekend to be held were qualifying, which took place in abysmal conditions. Suhle took the first two poles for Saturday, with Team BRM’s Cameron Shields taking both poles for the Sunday races.

Suhle converted the first of his poles into a dominant victory, with Shields finishing second after a controversial collision with Ojeda. The pair touched on lap two, breaking Ojeda’s rear suspension and causing him to retire.

Rookie Lochie Hughes took his first win in the reversed grid race, holding on through two safety car periods to beat Shields and Suhle. This time it was Suhle who clashed with team-mate Ojeda, but the latter managed to finish the race in points, albeit a lap down.

Ojeda seeked vengeance in the third race, and after getting past Suhle pulled away to win by 8.5 seconds, and retain the championship lead. Suhle finished second, with Aaron Love beating team-mate Shields to the final podium spot. Antonio Astuti finished a career best fifth.

The resurgence continued into Sunday for Ojeda, who moved past poleman Shields at Turn 2 on the first lap of the fourth race and took a second victory in a row. It wasn’t an easy win though, as Suhle pushed Ojeda to the flag. They were 10 seconds clear of Jackson Walls, who took his and the Patrizicorse team’s first podium in the championship from seventh on the grid.

Shields moved down the order after Ojeda got the better of him, and he ended the race in seventh.

Love became the second new winner of the weekend in race five, following in older brother Jordan’s footsteps. Suhle finished second but was penalised for a clash with Hughes and abusing the safety car rules, demoting him to fourth behind Shields and Ojeda.

Ojeda once again stole a march on the opposition in the final race, but with Suhle joining him on the podium it meant he left Winton with a decreased championship lead. He was untouchable in the race though, with other main title rival Shields splitting the team-mates in second place.