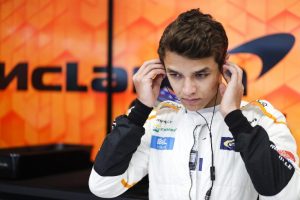 Formula 2 racer Lando Norris will step up to Formula 1 in 2019 with McLaren, replacing Stoffel Vandoorne to partner Carlos Sainz in its line-up.

Norris currently acts as the team’s reserve driver, a role he assumed last November, and made his free practice debut with the team at last month’s Belgian Grand Prix, deputising for Fernando Alonso. He did the same last weekend at the Italian Grand Prix, this time for Stoffel Vandoorne.

?To be announced as a race driver for McLaren is a dream come true. Although I?ve been part of the team for a while now, this is a special moment, one I could only hope would become reality,” Norris said.

Norris joined the McLaren young driver development programme at the beginning of last year off the back of a successful 2016 where he took the Formula Renault Eurocup and Northern European Cup titles and the Toyota Racing Series championship, won the McLaren Autosport BRDC Award and finished eighth with four wins in a part-season in BRDC British Formula 3.

?I?d like to thank the whole team for this amazing opportunity and for believing in me,” he said.

“I?m also extremely grateful for the commitment McLaren has already shown in my development, allowing me to build my experience in a Formula 1 car in both testing and on Fridays during the past two race weekends.”

Last year Norris raced in European Formula 3 and beat Joel Eriksson to the title, and finished second to Red Bull junior Dan Ticktum in the season-ending Macau Grand Prix. He made a brief F2 cameo, before switching to the series full-time this year.

He is second in the standings with four races left this season, 22 points behind Mercedes junior George Russell. Norris won the first race of the season, but has not visited the top of the podium since.

?For the remainder of 2018, my focus remains firmly on the Formula 2 championship,” he added.

‘My objective is to win the title before joining McLaren full-time, which will be tough, but I will fight as hard as I can for the remaining four races. I?ll also be working closely with McLaren at every opportunity to learn as much as possible from the drivers, engineers and mechanics to give myself the best preparation ahead of next year.”

McLaren CEO said: ?We believe Lando is an exciting talent, full of potential.

?We already know he?s fast, he learns quickly, and has a mature head on his young shoulders. We see much potential for our future together. The investment we have made in his budding career with simulator development and seat-time in the car has been well-deserved, as he has continued to prove his abilities both behind the wheel and in his work with the engineering team.

?Lando is an integral part of our plan for rebuilding our Formula 1 operation for the future, and he has already developed a strong relationship with the team.