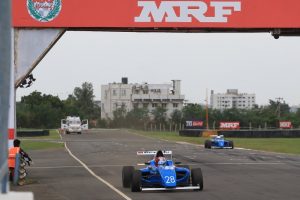 Formula 4 South East Asia’s first ever visit to India resulted in a double victory for Frenchman Alessandro Ghiretti at the Madras circuit.

Ghiretti started the weekend with pole position and then built from there, winning the first two races and completing the podium in the final race behind Muizz Musyaffa and championship leader Kane Shepherd.

Only twice in the first race did Ghiretti come under pressure, once being the start of the race and the second a safety car restart. He benefited from the squabbling for position behind him, which resulted in Shepherd being his closest rival.

Antoine Potty took his fourth third place in a row almost 10 seconds behind, followed by Aidan Wright and Musyaffa.

The reversed grid second race also went Ghiretti’s way, although it was Alister Yoong, son of former Formula 1 driver Alex, and Luke Thompson who initially fought over the lead. Ghiretti hounded the pair, and his move for second on Thompson resulted in the latter going airborne and dropping down the order after running onto the grass.

It wasn’t long before Ghiretti got past Yoong too, and he took his fourth victory of the season. Shepherd moved up to second, with Musyaffa a distant third after recovering from a messy start. Thompson and Yoong ended up fourth and fifth.

Musyaffa jumped from fourth to second at the start of the third race, and profited from a mistake by Yoong to take the lead at the end of the first lap. He looked confident up front, and survived a late race safety car restart to fend off Shepherd and Ghiretti.

Irishman Jordan Dempsey is getting ever closer to the lead of the Chinese F4 standings after taking two wins and a second at Ningbo.

Dempsey won all three races at Chengdu, and carried across that form to the mountainous Ningbo track. He won each of the first two races by more than 10 seconds, and set fastest lap in the reversed grid encounter on the way to second place.

He is now 18 points behind Daim Hishammudin in the standings, with the Singaporean taking a third, second and fifth. Luo Yufeng was the next fastest driver, visiting the podium in races one and two, but it was Shang Zongyi who took victory in the final race of the weekend.

“Two wins and a second, almost the perfect weekend as I was the fastest in every session,” Dempsey told Formula Scout.

“I had the extra motivation to win for my grandad who passed away suddenly before I left last week so I?m dedicating this to him!”

The second round of the relaunched Formula Academy Sudamericana championship took place at Brazil’s Formula 1 venue Interlagos, and provided some great racing.

Pedro Lopes was the man to beat in the first half of the weekend, taking a dominant pole and then beating Juan Vierira to victory in the first race. With round one dominator Pedro Saderi not present, Vierira became the new championship leader.

Leandro Guedes won the second race in a close battle with Bruno Testa, the pair a considerable distance ahead of the trio of Cassio Cortes, Lopes and Kiko Porto. Guedes is now second in the standings, three points behind Vierira.