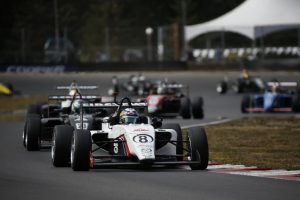 Kyle Kirkwood equalled J.R. Hildebrand’s record for most wins in a USF2000 season at Portland, taking his 11th and 12th triumphs.

The last time USF2000 visites Portland was in 2006, when future Indianapolis 500 runner-up J.R. Hildebrand won 12 times on the way to the title.

Cape Motorsporrs driver Kirkwood took pole for race one but lost the lead at Turn 2 when Rasmus Lindh drove round the outside of him.

The 2018 champion reclaimed the lead on the next lap, with Pabst Racing’s Lindh and Kaylen Frederick staying in his slipstream.

Their chance to get past seemed to come after a caution period, but both outbraked themselves at Turn 1 while attacking Kirkwood and dropped down the order.

Exclusive Autosport’s Igor Fraga inherited second, but was then penalised for his role in several incidents in the race. Another Pabst driver, Calvin Ming, took second, with DEForce Racing’s Kory Enders completing the adjusted podium.

Lindh limited the damage of his mistake to take fourth ahead of team-mate Lucas Kohl.

After briefly taking the lead in race one, Lindh started from it in race two, and held off Frederick, Kirkwood and Kohl in the first part of the race.

A collision between Jose Sierra and Braden Eves resulted in a caution period and almost the end of Lindh’s race after team-mate Frederick rearended him on the restart.

Somehow Lindh hung on to the lead, but it wasn’t long before Kirkwood found a way through and took his record-equalling victory. Second place for Lindh was still his best result of the season after four third place finishes, and confirmed him as runner-up in the standings.

Fraga jumped from ninth on the grid to run in third, was overtaken by Julian Van der Watt and Kohl, then took fourth from Kohl on the final lap of the race. It wasn’t enough to usurp his fellow Brazilian from third in the standings, falling short by two points.