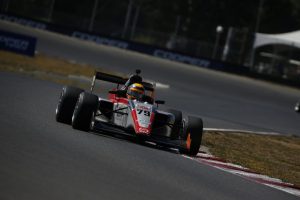 David Malukas took his third win of the season in the Pro Mazda season finale at Portland.

The BN Racing driver started second and emerged from the first corner chaos on lap one in the lead. A caution period prevented him from immediately capitalising on the position gain, but once the cars were released he was unrivalled.

Rinus VeeKay, who secured the title in the previous race, spent most of the race with old USF2000 rival and Portland race one winner Oliver Askew in his mirrors. On several occasions they got close, but Askew couldn’t find a way past and had to settle for third in the race and standings.

Thompson suffered a rear right puncture on the first lap, and after pitting for a new tyre kept himself busy going for fastest lap. The Exclusive Autosport man failed in doing that, but the extra point he gained would’ve had no impact on his spot as runner-up to VeeKay.

There were only eight cars present, with Portland being located a significant distance away from team bases. One such team that didn’t turn up was RP Motorsport, meaning two-time winner Harrison Scott ended the season eighth in the standings.