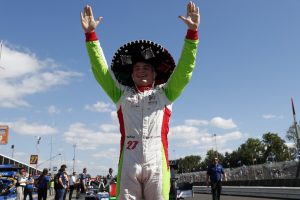 Patricio O’Ward ended his title winning Indy Lights season with his ninth victory of the year at Portland.

The race started in dramatic style when the grid went nearly seven wide into the first corner, with all but the Belardi Auto Racing pair of Aaron Telitz and Santiago Urrutia getting involved in contact.

Poleman Ryan Norman was out on the spot after being collected, with Victor Franzoni, Colton Herta and Dalton Kellett all heading to the pits. Kellett spent three laps with his Andretti Autosport crew examining his car, while team-mate Herta and Juncos Racing’s Franzoni were able to remain on the lead lap.

O’Ward made it through in third, with Franzoni’s team-mate Heamin Choi fourth. The race inevitably went under full course yellow conditions, and the restart was delayed when Choi let Franzoni and Herta by while still under yellows.

It took a few laps for Urrutia to move past team-mate Telitz to take the lead, and any hope his team-mate may help him to victory were gone when O’Ward snatched second a lap later.

The use of clever defending and push-to-pass prevented O’Ward from overtaking Urrutia for several laps, but the Uruguayan couldn’t maintain it and O’Ward executed a brilliant dummy move on the inside of the first corner.

Once ahead he was unstoppable, pulling away to win by 7.7855 seconds.

A mistake by Urrutia at Turn 1 then let Telitz back through, and he only just kept the final spot on the podium after a late attack by Herta.

With Norman out on the first lap, there was a possibility that Franzoni could reclaim fourth in the standings with a strong result. Although he was quick that wasn’t to be, and an aggressive move on Herta late in the race was reversed at the request of the stewards, meaning Franzoni ended the season fifth in the race and standings.

Choi finished a lapped sixth, but got enough points to move into 10th in the standings in the process, his best ever result.