Eurocup: The series that gave us Ricciardo, Bottas and future F1 stars 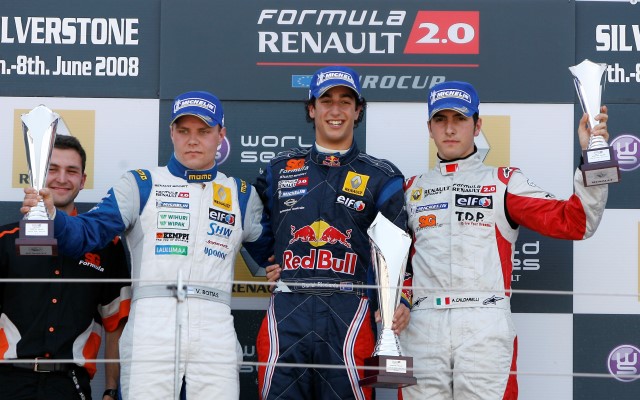 Daniel Ricciardo and Valtteri Bottas have been the two stand-out drivers of Formula 1 so far in 2014. Both 25, they have emerged as the two top performers outside of the dominant Mercedes team, holding third and fourth in the drivers’ standings.

Ricciardo, in his maiden campaign with the senior Red Bull team, has defeated his four-time world champion team-mate and claimed victory on three occasions – the only times Mercedes have been beaten.

Bottas, meanwhile, has also shadowed a more experienced team-mate at Williams, and scored four podiums in the space of five races during the summer.

In fact, last weekend’s Italian Grand Prix was the first time since China nine races beforehand that neither Ricciardo nor Bottas had been on the podium.

Both drivers were exciting prospects on their way up the ladder to F1. Their first success came fighting against each other in 2008, for the Eurocup Formula Renault 2.0 title.

The Eurocup is the major international series for Formula Renault 2.0, positioned between karting and Formula 3, and has a history dating back to 1991. Champions during the 1990s and early 2000s included Pedro de la Rosa, Enrique Bernoldi, Gianmaria Bruni, Felipe Massa, Scott Speed and Kamui Kobayashi.

In 2008, Ricciardo and Bottas were in their second seasons in FR2.0, and became the champions of their respective regional series – the West European Cup (born out of the long-running French championship) and the Northern European Cup (a merger of German and Dutch leagues). The Australian was a recent addition to Red Bull’s Junior Team scheme, and the Finn supported by a loyal set of local sponsors.

Ricciardo took first blood with a win in the season opener at Spa, while Bottas was forced to settle for third having started from pole. At the next round at Silverstone, Bottas was a dominant winner in the first race and Ricciardo fourth. The second race of the British meeting was a classic, and and a battle that has been revisited in 2014. 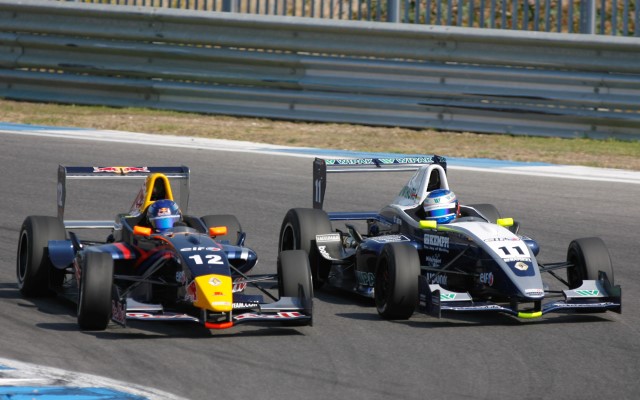 Ricciardo and Bottas scrapped over the 2008 title (Photo: Francois Flamand/DPPI)

Bottas began the race from his fourth pole from four races and led the early stages, while Ricciardo moved up from third to second on the opening lap. The pair pulled away from the rest of the field, but were less than half a second apart for most of the race. Bottas absorbed the pressure brilliantly, but Ricciardo finally found a way past on the very last lap. He defended the lead through the final turns to claim the win. That gave him a seven point lead over his rival in the standings.

The momentum was now with the Australian and in Hungary he scored another two wins, this time from pole position. Bottas scored no points, after having his qualifying times taken away for a non-conforming engine part. That put 38 points between the pair. At the Nurburgring, Bottas was second and Ricciardo third in the opener, as Roberto Merhi claimed victory. Bottas came back to winning ways from pole in race two, with Ricciardo fifth.

Ricciardo was still 19 points out front at this stage, and 27 ahead of Bottas. But things took a turn for the worse at Le Mans, when an engine problem stopped him from starting the first race. Bottas was third, and then won the second race, when Ricciardo slipped back from third on the grid to sixth. Andrea Calderelli therefore drew level with Ricciardo after six second-place finishes, while Bottas was loitering just seven points further back.

Ricciardo bounced back in style in the opening race of the penultimate event at Estoril with victory from pole with Bottas third, giving Ricciardo a 13-point margin. However, Bottas then won race two and Ricciardo lost ground on the first lap, finishing back in tenth. Bottas therefore took a one-point lead into the final round in Barcelona.

Things looked up for Ricciardo when he took a double pole, but poor weather stopped it being that simple. Bottas stormed through from 11th on the grid to claim victory, while Ricciardo slipped back to sixth. Bottas now had a ten-point margin going into the final race, where he would start sixth with Ricciardo on pole again.

Ricciardo claimed his sixth win of the year, but Bottas gained a couple of spots to finish fourth and therefore seal the title by three points.

2008 was not just some fluke year for the Eurocup – it has continued to produce top talent ever since. In 2009, Albert Costa beat Jean-Eric Vergne and Antonio Felix da Costa in a three-way tussle for the title. Rookie Kevin Magnussen was seventh.

2010 saw a smaller grid with a brand new car, but Kevin Korjus impressed with a dominant run to the title that would see him signed up by Gravity Sports Manangement and affiliated to the Lotus F1 team. He beat future F2 champion Luciano Bacheta, recent GP2 winner Arthur Pic and then-Nicolas Todt protege Aaro Vainio, fourth in his rookie year in cars. 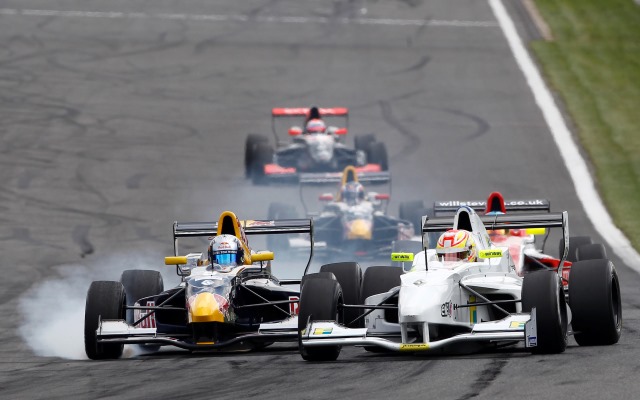 2011 saw numbers boosted again, partly thanks to the demise of rival series Formula BMW Europe. Three products of that category would take the Eurocup by storm, with Robin Frijns winning a second consecutive title ahead of Red Bull teenagers Carlos Sainz and Daniil Kvyat. Kvyat stayed on for a championship assault in 2012, but was pipped to the post by Stoffel Vandoorne, who signed with McLaren a few months later. Last year, Pierre Gasly defeated his current FR3.5 rival Oliver Rowland and European F3 star Esteban Ocon.

The 2014 edition of the Eurocup resumes this weekend after a two-month break, with the first of the final three rounds taking place at the Hungaroring. Long-time McLaren protege and former double world karting champion Nyck de Vries is currently top of the class, and is seeking a double title in his third year at this level after wrapping up the Alps series crown last weekend. He’s won two races so far this season, and has finished seven of the eight races inside the top four.

His nearest rival is Dennis Olsen, a rookie in the Eurocup and in only his second season in single-seaters. He too has won two races, but has otherwise been more inconsistent than de Vries. In the pack behind him, there are a number of drivers with plenty of car racing experience. Bruno Bonifacio and Andrea Pizzitola are in their fourth years, while Alex Albon made the step up with de Vries after the two were long-time karting rivals. Kevin Jorg, in sixth, is another into his fourth campaign in a car.

But although these drivers have an experience advantage, they are doing well to put a number of successful and highly-rated drivers into the shade. Elsewhere in the field there is Matt Parry, McLaren Autosport BRDC Award winner and Caterham-backed, as well as fellow Briton Jack Aitken, who he beat to the NEC title last year. There’s Ignazio D’Agosto, another former rival of de Vries and Albon in the world karting scene.

Callan O’Keeffe was strong enough in karting to attract Red Bull’s attention and is now with Albon at Lotus. Nick Cassidy is a two-time champion in the highly competitive Toyota Racing Series in his native New Zealand. Antoine Hubert last year won French F4, which previously produced Vandoorne and Gasly among others. BRDC F4 champion Jake Hughes and one of his rivals Matthew Graham join the series this weekend with Strakka. 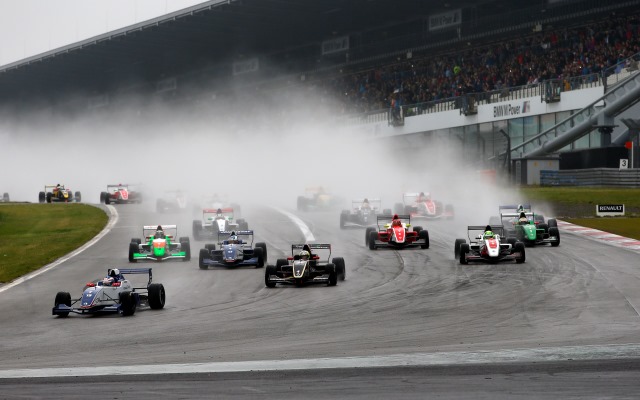 The Eurocup is something of a hidden gem in racing. It lacks the high profile of GP2, GP3, FR3.5 and F3 because it’s perceived to be entry-level, but the level of the drivers in terms of talent and potential is at least as strong as those series – or perhaps higher. It’s the only series that has seen Bottas, Ricciardo, Vergne, Magnussen, Kvyat, Vandoorne, Sainz, Gasly, Rowland and Ocon all pass through it. If you want to choose a series to watch in order to see as many future F1 stars as possible, this might just be it.

What’s more, with low power and low downforce, the cars produce some great racing. It isn’t without incident, but the best drivers can fight cleanly, as shown by Ricciardo and Bottas all that time ago, and by others more recently. All in all, the level of competition provides a rigorous test of young racing talent, at a relatively early stage in their careers.

It speaks volumes that the top graduates of Eurocup Formula Renault 2.0 each year have gone on to be immediately competitive in FR3.5, GP3 and F3, and that all of F1’s new stars learnt their trade in the championship too.