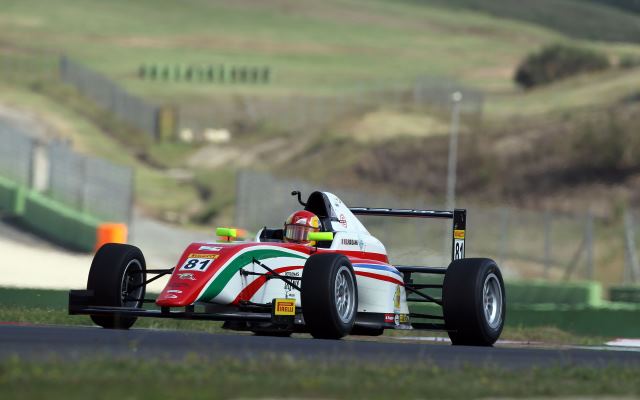 Prema’s Brandon Maisano enjoyed a strong start to his weekend by topping both practice sessions in the fifth round of the Italian F4 season at Vallelunga.

The 21-year-old Frenchman, who leads the Trophy class standings, went quickest in the morning by 0.042 seconds?ahead of teammate, and main series championship leader Lance Stroll.

Italian Mattia Drudi was third quickest, ahead of Leonardo Pulcini, who was the top Euronova driver. Brazilian Joao Vieira, driving for Antonelli, made up the top five, with the third Prema driver Takashi Kasai in sixth place.

The second session saw track temperatures increase considerably, which prevented most drivers from improving on their first session times. Maisano was the one of the few drivers in the top ten in the morning to post a faster time, though his improvement was only eight-thousandths of a second.

Drudi pipped Stroll to second, while Russo and Ivan Matveev made up the top five, the Russian also improving on his lap time in the morning.?Camilleri was sixth fastest, ahead of Euronova duo Pulcini and Andrea Fontana. Kasai and Valente rounded out the top ten.

Eurocup: The series that gave us Ricciardo, Bottas and future F1 stars

Back to the front: Jimmy Eriksson