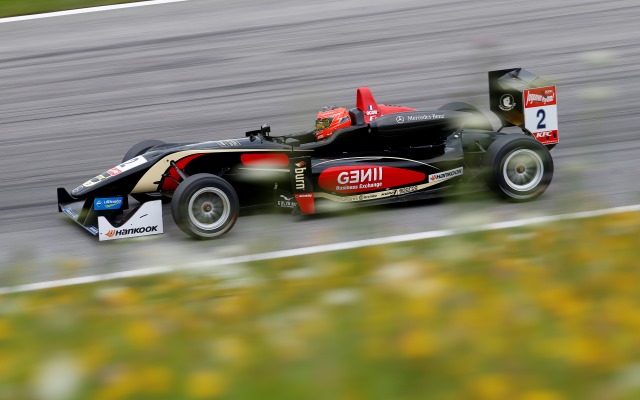 Esteban Ocon claimed his 14th pole position of the FIA F3 European Championship season as he conquered a four-way battle in first qualifying at Spielberg.

The championship leader hit the top of the timing screens with his first lap of the session and gradually improved his benchmark so that he was still ahead as the session entered its final five minutes.

Antonio Giovinazzi then proved his practice pace was no fluke when he moved towards the front. He initially moved into P2 but although that time was then deleted, he went quickest with his next effort.

The Italian set a personal best first sector and a then-purple second sector on his next lap, but pitted before completing the lap.

That enabled him to be immediately demoted by Jagonya Ayam with Carlin team-mate Tom Blomqvist. The Briton went quicker still on his following two laps, first increasing his margin over Giovinazzi and then reclaiming first after Max Verstappen had briefly stolen it away.

Ocon however wasn’t to be beaten, going almost two tenths of a second quicker than Blomqvist to seal pole for Saturday’s opening race as the only driver all day to dip below the 1m25s mark.

Verstappen slotted into second with his final effort, 0.15s away from his recent rival (the leading pair have won the last 11 races between them).