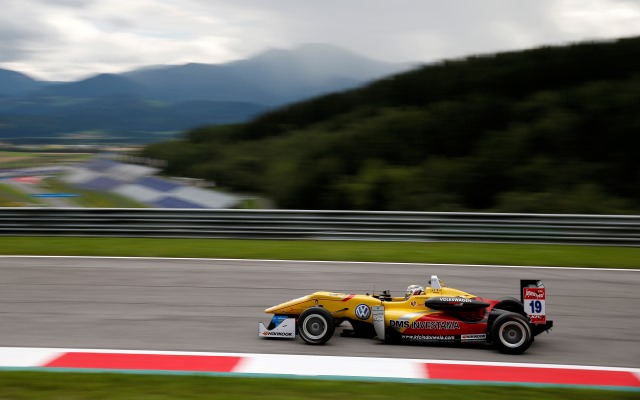 Antonio Giovinazzi showed improved pace as he led the way in both free practice sessions at the eighth round of the FIA F3 European Championship in Spielberg.

Giovinazzi’s Carlin team enjoyed a promising start to the weekend at the Austrian circuit, with three of its drivers making the top four in each session.

The Italian, who has slipped to tenth in the standings having not finished a race inside the top six during the last three rounds, set a time of 1m25.843s in the opening session and then shaved almost exactly half a second from his benchmark in the second segment to manage a 1m25.347s.

Jake Dennis had an impressive run with a second and a third in the two sessions, swapping positions with Esteban Ocon, who carries a 116-point advantage into the Austrian event.

Tom Blomqvist was fourth in the first session ahead of Prema duo Antonio Fuoco and Dennis van de Laar, with another Carlin driver and another Prema man completing the top eight in the form of Jordan King and Nicholas Latifi respectively. Mucke Motorsport duo Lucas Auer and Felix Rosenqvist – the local hero and 2013 triple winner at Spielberg respectively – set identical times as they completed the top ten.

King was fourth in the second session, followed by seven-time 2014 winner Max Verstappen, who was a quiet 11th in the opening session. Blomqvist, van de Laar and Fuoco followed. Ninth was Ed Jones, making his return to the series after skipping four rounds due to injury, and Auer was tenth.

After forgoing the trip to Moscow, the T-Sport and Fortec teams have returned to the fold, although Alfonso Celis is back with the latter team in place of Mitch Gilbert, who has transferred to GP3. Double R are absent having failed to find a replacement for the departed Felipe Guimaraes.