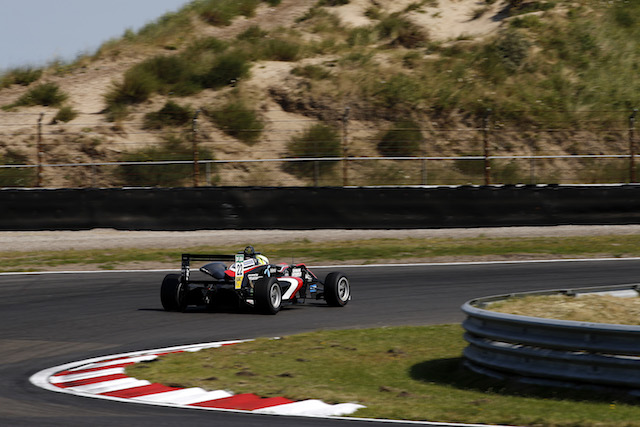 The Swedish F3 rookie got a far better launch than the polesitting Briton, who had set the pace in every prior session.

Eriksson was then able to pull away,?leading by over two seconds before backing off on the final tour, with Ilott crossing the line 1.4s behind.

Red Bull Junior Niko Kari joined Motopark team-mate Eriksson on the podium after getting down the inside of Hitech F3 returnee Alex Albon at the first corner. The 16-year-old Finn had the pace to finish just 0.79s behind Ilott.

GP3 title contender Albon took a relatively distant fourth in front of Sergio Sette Camara, the Brazilian – who finished on the podium 12 months ago – recovering from qualifying a lowly eighth with a strong start.

Pedro Piquet matched his best European F3 result to-date by starting and finishing in sixth, just ahead of?Anthoine Hubert.?Alessio Lorandi?held off David Beckmann for eighth while?Guan Yu Zhou was 10th after a poor getaway?from fifth on the grid.

Sam MacLeod was forced to retire?on his return to action with Fortec after?bending a wishbone, while Carlin’s?Colton Herta and Ameya Vaidyanathan?both pitted with engine misfires.