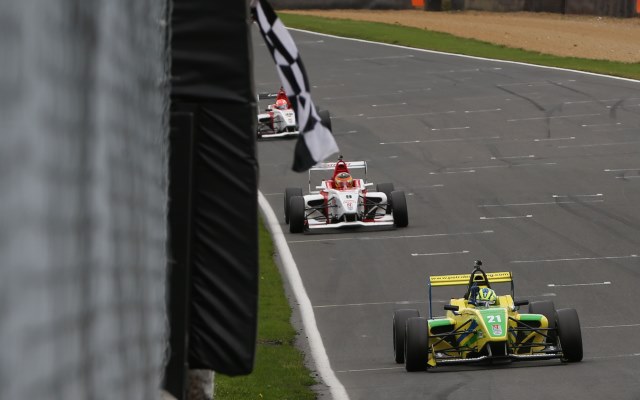 Gaetano di Mauro claimed his maiden win in BRDC F4 in the opening race of round six at Brands Hatch, holding off Lanan Racing duo Struan Moore and Arjun Maini.

Moore got the jump on his team-mate Maini off the line to get up into second place behind pole-sitter di Mauro. The Jersey racer remained within a second of the Brazilian leader for the entire race but di Mauro did enough to stay ahead to get the first win for himself and the Petroball team.

“It’s unbelievable, I’m so happy,” he said afterwards. “Struan was so quick and I had to be very careful not to make a mistake. He was able to catch me in the first sector, but I managed to keep him behind me. This is a great result for the team and myself, and now we can hopefully move on and get some more.”

Maini finished within 1.5 seconds of the winner in third, while Raoul Hyman was 15 seconds back in fourth place. The HHC driver had to spend the race defending from Jordan Albert, who scored his best result yet in fifth for the newly Caterham-affiliated SWR squad.

Silverstone treble winner Sennan Fielding took sixth after his qualifying off ahead of Chris Middlehurst and Will Palmer, who will start on reverse grid pole for race two.

Gustavo Lima was ninth, and George Russell put in a fine recovery drive to tenth after starting 21st and last following a qualifying crash. The result means he retains the championship lead, just one point ahead of Hyman.