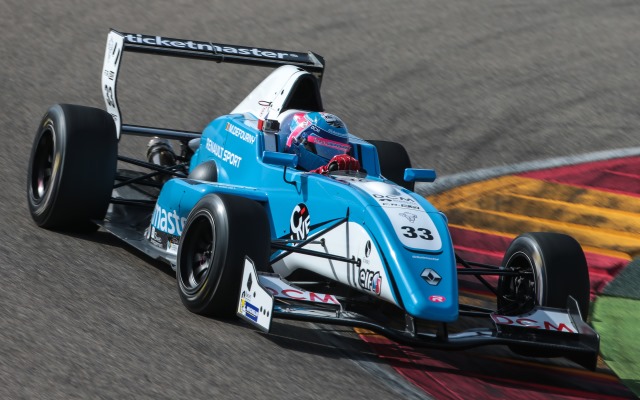 Max Defourny was quickest by over half a second on the opening day of Eurocup Formula Renault pre-season testing at Motorland Aragon.

The Belgian set his best time of 1m54.751s during the morning session, before Dorian Boccolacci topped the afternoon running on his step down from Formula 3.

Defourny’s team returned to its original R-ace GP moniker for the start of testing, after spending three seasons under the ART Junior Team banner.

The top rookie from the 2015 NEC season, Defourny was 0.739 seconds clear of the opposition in the morning and one tenth up on his best time from the test at Aragon that he dominated in November.

One week on from claiming the Toyota Racing Series title in New Zealand, Lando Norris was second quickest in the morning for Josef Kaufmann Racing ahead of fellow rookie Sacha Fenestraz (Tech 1 Racing).

Having been 12th in the morning as he settled in with Tech 1, Boccolacci came out on top of a battle with JKR pairing Norris and Jehan Daruvala in the afternoon.

Force India protege Daruvala was 0.112s off Boccolacci, with Norris a third of a tenth behind that.

R-ace GP and AVF were again present in the top five, this time courtesy of Julien Falchero and Harrison Scott respectively, with Defourny sixth.

Robert Swartzman, driving the third JKR car at his first appearance in an official Formula Renault test, had the 13th best time of the day with 10th place in the afternoon.

Second to 16th on the day’s combined times were split by less than a second.