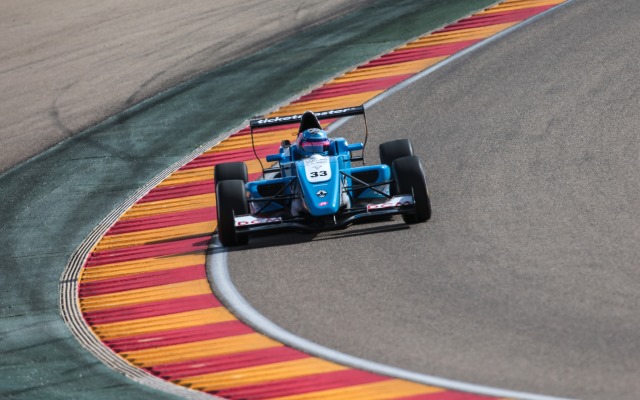 Max Defourny continued his winter supremacy by being quickest again on day two of the first Eurocup Formula Renault pre-season testing at Aragon.

Overnight rain meant a wet start to the day, when former Formula 3 racer Dorian Boccolacci led the way for a second straight session by just 0.011 seconds from Lando Norris.

Defourny clinched top spot late in the afternoon with a time of 1m55.126s, which was over three tenths down on his best time from Sunday.

Toyota Racing Series champion Norris was close to the top of the times again, this time 0.074s adrift of Defourny.

Bruno Baptista was a strong third in both sessions for Fortec, and in the afternoon he was just ahead of Norris’ two Josef Kaufmann Racing team-mates, Robert Shwartzman and Jehan Daruvala.

?The tests went really well,” said Shwartzman. “Today was just my fourth day in Formula Renault 2.0. The car has more aerodynamics than an F4 and I had to get used to it to get the most out of it in the corners. There is a big difference, but the team explained to me where I needed to improve my driving style to move forward.

“I made a lot of progress with the new tyres, which is an excellent thing because it is extremely difficult to reach the peak performance of the Michelins.

“This year, I will race in NEC and we?re working on a deal to do a full season in the Eurocup as well.?

The four Tech 1 Racing drivers were next up, with Sacha Fenestraz ahead of Gabriel Aubry, Boccolacci and Hugo de Sadeleer, with AVF’s Harrison Scott rounding out the top 10.

Felix Rosenqvist to race in Indy Lights with Belardi