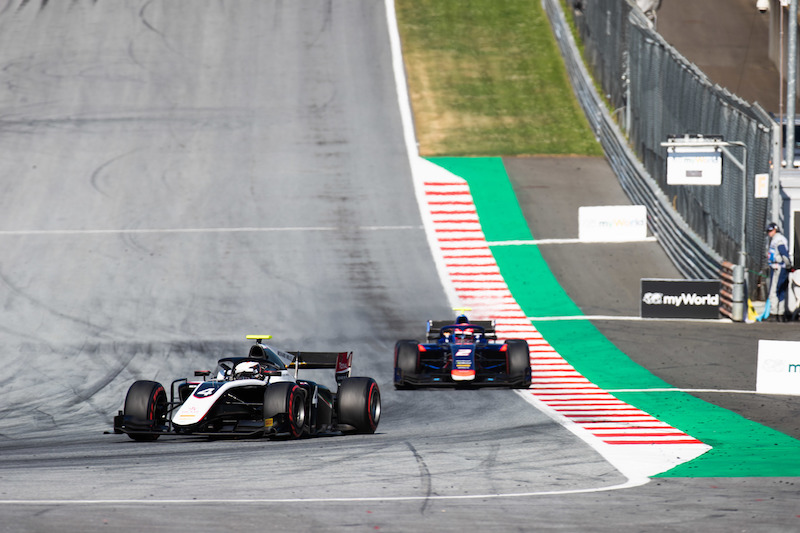 Nyck de Vries believes that Mick Schumacher’s strong pace may have contributed to the tyre wear that cost him victory in the Formula 2 feature race in Austria.

ART driver de Vries appeared on course for a third straight feature race win before succumbing to both Matsushita and Luca Ghiotto late on after wearing his tyres too quickly.

After pitting to swap from supersoft to soft tyres on lap six, de Vries spent the next part of the race chased not by Matsushita but by Schumacher, who was on the same strategy but a lap down after he stalled at the start of the formation lap.

De Vries explained that wanting to keep ahead of Schumacher may have caused him to use his tyres faster than he should have done, but added that it was “no excuse” for his issues.

“I expected it to be that challenging, but I thought for at least the majority of my prime stint after the pit stop that everything was under control,” said the Dutchman, who still increased his points lead by finishing third.

“Apparently I was too eager in the first phase of the prime stint and asked too much from my tyres, and when you’ve done that there is no way back and no way to recover.

“It was also a bit annoying because obviously we were reaching quite a lot of people who started on the prime tyre and Mick came from the pit lane and he was unlapping me, and he was pushing.

“In the beginning I thought I’d rather stay in front so I pushed a bit harder and then I was like ‘this is too quick so I need to release him’.

“In terms of management that wasn’t ideal but there’s no excuses. I mean I’m in the car and it’s my job to do that.”

Schumacher explained the circumstances behind his failure to get away from the grid for the formation lap, which resulted in an 18th-place finish after qualifying seventh.

“There is no point to hide that this has been a very frustrating race because as timings show the pace was there,” he said.

“In the installation lap, we had some issues early with the clutch. We stalled in the pit-lane and for some reason it didn’t engage.

“Going to the grid it seemed it was ok but it wasn’t – on the grid the gear was not going in. We had to go to the pit-lane, we changed the steering wheel and after some resets it suddenly worked.

“It’s just a shame, we had everything we needed, a good qualifying, a very good pace so it’s very hard for the whole team to put those setbacks behind, especially technical ones where nobody can do anything.

“However, I won’t stop fighting, we won’t give up. We have to take the positives from days like this.”