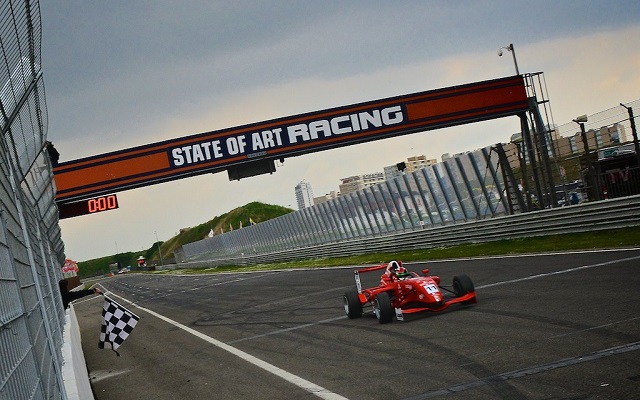 Having won the first race earlier today, Australian Anton De Pasquale went on to dominate the second one to ensure a sizeable points lead after the opening round of the 2014 FR1.6 NEC season.

Starting from pole, the 18-year-old kept his first off the line and immediately established a solid on-track adanage. He was reliably faster than his opponents and eventually managed to build a 8.4s gap at the checkered flag.

Karting graduate Ferdinand Habsburg completed a Lechner Racing one-two after passing Larry ten Voorde on the second lap. The Pirosport racer stayed close behind the Austrian, but couldn’t pull off a move, rounding out the top three.

Having to defend from Ralf Aron and Oliver Soderstrom in the closing stages of the race, Janneau Esmeijer narrowly held on to fourth. The aforementioned Aron settled for fifth ahead of his teammate Soderstrom and Boris Kolff.

It was a difficult race for Lechner’s third man Florian Janits, who lost six positions during the first two laps and had to settle for eighth despite starting from second row. The top ten was completed by Belgian Max Defourny and Swede Pontus Fredricsson.