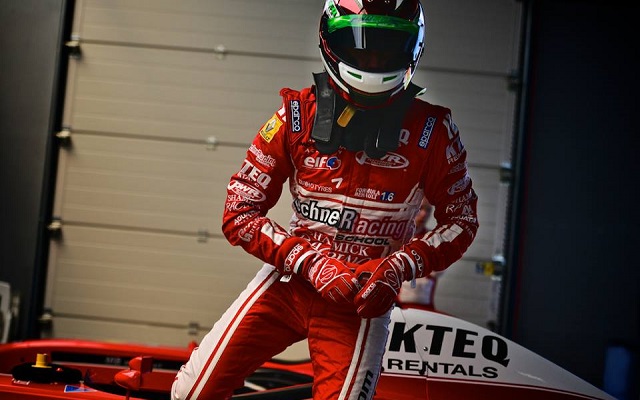 Lechner Racing’s Anton De Pasquale starred in the opening race of the 2014 Formula Renault 1.6 NEC season at Zandvoort, converting his pole position into a rookie win.

The Australian did not have it easy, though, as he was beaten off the line by fellow front row starter Larry ten Voorde and was boxed in behind the Dutchman over the opening lap.

While Janneau Esmeijer, who started from fifth, managed to close in on the leading duo, De Pasquale wrestled the lead back from ten Voorde and began to pull away into the distance.

His victory would not be under threat for the remainder of the race, as he managed to establish a three-second gap over his rivals at the checkered flag.

In second, Ten Voorde was kept busy by fellow 2013 race winner Esmeijer, who came close to overtaking the Pirosport racer on several occasions, but would eventually have to settle for third.

Estonian Ralf Aron was eighth, ahead of Marcel Lenerz, who started last after having missed qualifying, and Boris Kolff.

French F4 graduate Neal Van Vaerenbergh was running in P7 when he went off into the barriers on lap four, becoming the race’s only retirement.