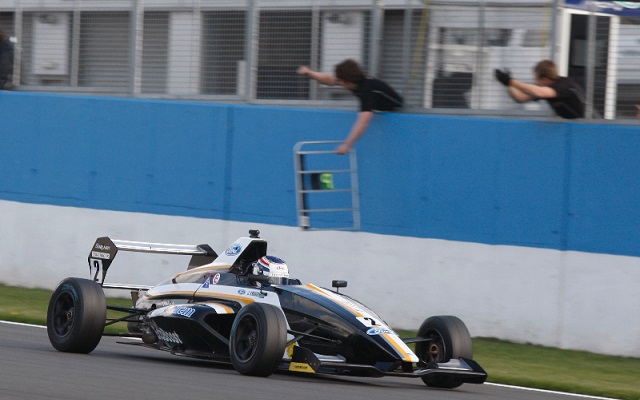 JTR’s Jayde Kruger returned to the lead of the UK Formula Ford standings by taking his third win of the season in an incident-heavy third race at Donington Park.

The South African started the race on second row alongside teammate Max Marshall, with Harrison Scott, who took a win earlier today, lining up on pole and Sam Brabham in second.

The poleman didn’t get a great getaway off the line and, as such, it was JTR’s Brabham who slotted into first, narrowly leading Scott and Kruger. The Falcon driver had a few looks at taking the lead back over the opening lap, but was denied by Brabham, who eventually established a solid lead.

There was trouble right away, as SWB’s Greg Holloway found himself punted into the gravel and then crawled back to the pits with rear wing damage.

As Scott held Kruger at bay for second, their fight took on a whole new meaning when Brabham went off out of the lead on lap six, clobbering the barrier and exiting the race.

Meanwhile, there was further mayhem down the grid, as Radical teammates James Abbott and Juan Rosso came together at Redgate. Abbott went wide, allowing Ricky Collard through, but when Rosso attempted to follow the Falcon man, his squadmate ended up shutting the door, which resulted in contact. Both drivers managed to continue the race down the order.

At that point, Falcon’s cars were running in first, fourth and fifth, but the team’s race went to complete disaster midway through. First, as Collard attempted to overtake Chris Mealin for P4 and Scholarship lead, the latter moved over on his teammate and ended up putting him out of the race.

Almost immediately after that, Scott’s victory bid came undone, as his engine began coughing up smoke and properly gave up in the span of two corners.

JTR’s Kruger inherited the lead, but he himself began to encounter some problems, as he started dropping speed in comparison to second-placed Marshall. The Brit managed to dramatically close the gap between himself and the lead in the closing stages of the race, but Kruger held on to take his third win of the season.

In a race of attrition, it was Rosso who completed the podium, as he caught up to the battle for the Scholarship lead between Mealin and Connor Mills and then passed them both.

Mills himself went through on Mealin afterwards and went on to round out a Scholarship class hat-trick at Donington with fourth at the flag.

His teammate Bobby Thompson also overtook Mealin to take fifth, while the Falcon driver rounded out the class podium in sixth.

James Webb, Abbott and Holloway rounded out the finishers.