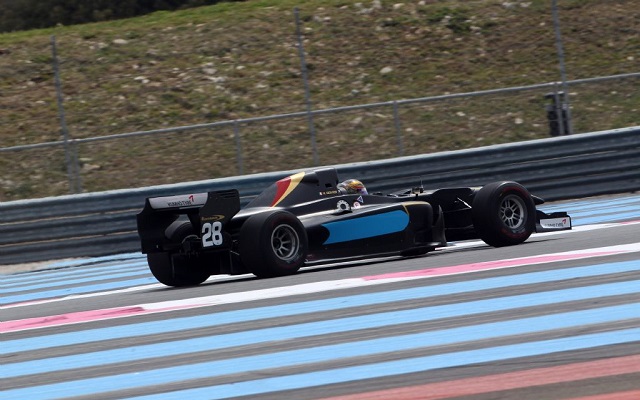 The Italian racer, who previously crossed the line in first on two occasions in his Auto GP career and had both wins disallowed post-race, reigned supreme in the reverse-grid race after starting from fifth place.

Yoshitaka Kuroda was the polesitter, but struggled with the getaway, allowing fellow front row starter Michela Cerruti to lead the race into turn one.

The Super Nova driver led the opening lap and soon began to pull away from the rest of the field bar her compatriot Giovesi, who managed to keep up in second place.

Shortly thereafter, Cerruti came under massive pressure from Giovesi, who managed to pull off an overtake for the lead into the final corner.

While Kuroda was an early third on the road, he soon fell prey to Tamas Pal Kiss and Kimiya Sato. The Euronova driver, who picked up some front wing damage over the opening laps, was the first frontrunner to go for his mandatory stop – a strategy that had worked out for him on multiple occasions before.

Kiss pulled in a lap later and managed to rejoin ahead of Sato. However, neither of them had an upper hand on Giovesi, who was continuing to set the pace out front, despite being on older tyres.

The situation would change at the race’s halfway point, when Kiss began to put in the benchmarks. Cerruti soon came into the pits and, despite a quick stop from Super Nova, came out narrowly behind the Hungarian. Giovesi left his mandatory stop even later, but still managed to rejoin comfortably out front.

The fight for the lead seemed over at that point, but Kiss suddenly found pace on Giovesi, despite the latter’s fresher tyres. The Hungarian managed to push the Eurotech driver to the very end and crossed the line just one second behind.

The race saw one retirement in Loris Spinelli, whose gearbox failed on the formation lap.