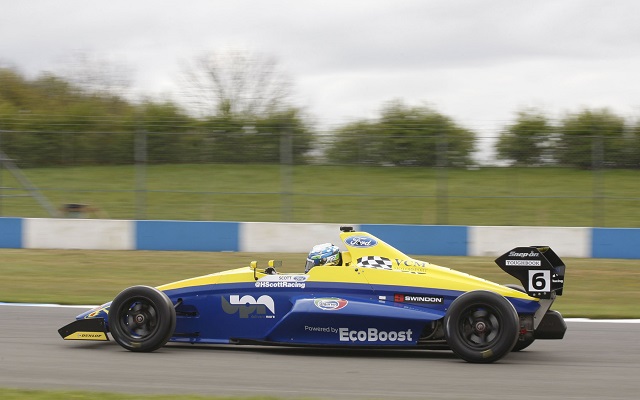 Falcon Motorsport’s Harrison Scott mastered the damp conditions in Formula Ford’s second race at Donington to take his first win of the 2014 season.

Scott charged through the field from fourth on the grid to take a dominant first at the checkered flag, several seconds clear of his rivals.

Reverse-grid poleman Max Marshall did not manage to keep his lead off the line, allowing front row starter Juan Angel Rosso into first, as championship leading duo of Jayde Kruger and Scott settled into third and fourth.

As Rosso began to run away from Marshall, Scott made quick work of a struggling Kruger and then proceeded to take P2 off his JTR teammate.

After making it to second, Scott found himself almost five seconds down on the leader, but proceeded to cut the gap down in no time and, with nine minutes to go, he passed Rosso for the race lead.

Behind the fight for the win, JTR pair of Kruger and Marshall found themselves tumbling down the order, with James Abbott slotting into P3. However, the Radical Motorsport driver soon fell prey to Scholarship leader Connor Mills, who then proceeded to rapidly reel in Rosso.

The Meridian racer overtook the Argentinian for second with five minutes to go and immediately pulled away into the distance. The two pacesetters – Scott and Mills – proceeded to exchange fastest laps and crossed the line in first and second respectively, 4.5s apart.

Rosso made it to third, ahead of teammate Abbott. Sam Brabham was the top-placed JTR man in fifth, having overtaken squadmates Kruger and Marshall, who were sixth and seventh at the line.

Bobby Thompson ensured a Meridian 1-2 in the Scholarship class with eighth, while Falcon duo of Ricky Collard and Chris Mealin rounded out the top ten.